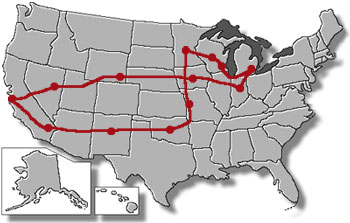 Last year I spent five weeks doing the ultimate tour of the US, covering 8000 miles, 33 states, and 2 countries. It was a pretty amazing thing, and I met a lot of really great people in the process. Since I’d already done several other really big road trips that year too, I swore I’d never drive anywhere again (or at least for a year or so). It’s been a year. I’ve headed out again. I love being on the road.

This year, the tour was scaled back a bit, and the invasion victims were Detroit, Minneapolis, Indianapolis, and a few one-nighters. Along the way, I added two more states to my “collection” (Nebraska and Iowa). And I added over 7000 miles to the odometer.

Sunday 10/18: San Francisco to Wells NV
This will be boring.

Wednesday 10/21: Des Moines to Indianapolis IN
This is a good opportunity to rest up and visit Bob and Cody. And eat well.

Friday 10/23: Indianapolis to Detroit MI
The calm before the storm.

Saturday 10/24-Sunday 10/25: Detroit
Lots of plans in Detroit, led by the demolition of the former Hudson’s Department Store on Saturday. I’ll be lurking about with Scott and Mike, and other plans include touring various aspects of urban decay and automotive history, as well as a run to Canada and to this incredible used bookstore I’ve heard about.

Monday 10/26: Detroit to Milwaukee WI
I may skip Chicago this time due to time and budget constraints. I’m not sure yet. An evening of drinking with David in Milwaukee is in the cards. This part of the trip may run an extra day.

Thursday 10/29 – Tuesday 11/3: Minneapolis
I’ll be here for a week. Lots on the agenda, from carnal knowlege to visiting several old friends. Possible side trips to Fargo and Duluth. Maybe even LaCroix…who knows?

Wednesady 11/4: Minneapolis to Kansas City MO
I know people in KC. I haven’t contacted them yet, because this was a recent addition. We’ll see what happens.

Thursday 11/5: Kansas City to Oklahoma City OK
I won’t have a lot more time than I did last year, but maybe this time I’ll figure out how to cruise the Habana Inn. Or maybe not…

Friday 11/6: Oklahoma City to Albuquerque NM
I trust the balloon people will be gone.