Twenty-three years later, Belk is gone. Dillard’s is gone. The theaters are closed. Montgomery Ward has the same lime green and burnt orange carpet it had in 1976, which seem to give it a remarkable staying power. Most stores are vacant; many of them were never occupied at any time in the past two decades. The county is seriously considering converting the mall into offices and a community college campus.

This is the definition of a ghost mall. Maybe this is why I’m so fascinated with ghost malls. I grew up going to Carolina Circle Mall pretty regularly. And during my early 20’s, I spent a year working in this mall.

Some would say Carolina Circle was doomed from the start. Its design was so outlandishly “70s modern” that the whole place looked out of date within two years of its construction. The neighborhood was not great and got worse over time; Greensboro’s wealth and population have always clustered to the west. On top of that, the site was plagued by an intense stench for its first few years due to a nearby waste treatment plant.

When I worked in the mall in 1985, rumors of its demise were already at hand. Over a third of the space was vacant even then and the remaining stores were vacating at an alarming pace. No one was updating; most chain stores were museum pieces already. The store I managed made its retreat shortly after I left in early 1986. 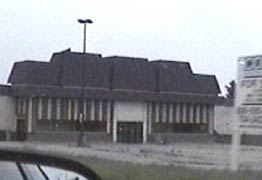 It was already very troubled. The few customers who braved the mall were redneck mall rats who came mainly to play pinball and buy drugs, and project kids who hung out by the skating rink. Unlike the malls of today which are designed to discourage teenagers, Carolina Circle was designed to attract them. Maybe this was one of the biggest mistakes its developers made. 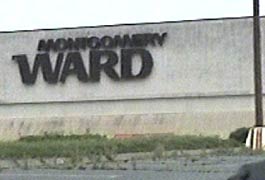 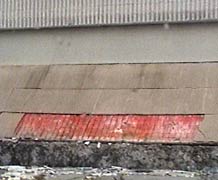 A complete internal renovation late in the 1980s slowed the pace, and some chain stores actually came back…briefly. Ward’s attempted to mask their screaming orange exterior tiles, but didn’t bother to replace some of the original 1970s lime green shag carpet inside. In keeping with the fashion of the time, the interior of the mall was very blue, and (once again) looked rather dated only a year or two later.

After a few years, the renovated mall was even more like a ghost town than before. There was just no one there and no stores for them to go to. It was just plain creepy…

1958: Developer Joe Koury starts talking about building a shopping center in southwest Greensboro. He expands his plans several times during the 1960s but doesn’t start the project. While he waits, other developers make plans of their own.

April 1974: Alpert breaks ground on the Carolina Circle Mall in the city’s northeastern outskirts. The owners figure the location will attract shoppers from Reidsville,Eden, Burlington and even southern Virginia. The site is difficult to reach by car, but Mayor Jim Melvin and other city leaders push successfully for public money for street improvements.

July 30, 1976: The mall sponsors a gala ball benefiting the Carolina Theatre. More than 1,200 people dance to Glenn Miller and other Big Band music. There’s talk of making the ball an annual event.

Aug. 4, 1976: The mall holds its grand opening. Mall manager Ray Brantley says the special features like the ice rink will appeal to children much as Ronald McDonald and McDonald’s playgrounds help sell hamburgers. “The housewife spends most of the disposable income in the family,” he says. “And who controls the housewife? The kids. It’s true. We want this to be a pleasant place for kids to be.” Twenty-two stores opened, with another 50 to follow within a few months. Visitors also notice the smell of the city’s nearby sewage treatment plant. Equipment is later added to the plant to reduce the smell.

December 4, 1977: At 10:30 on a Sunday morning, three deer,apparently startled by cleaning equipment churning through the mall parking lot, panic and run through two plate glass windows. The deer then fall 18 feet to the mall floor, near the ice rink. One doe breaks its neck and dies. The other two are captured and released. Deer are a common site near the mall, which is still on the outskirts of town at this time.

August 1986: An Australian firm buys Carolina Circle through its U.S. subsidiary, Sunshine Properties Inc. of Dallas. The new owner promises to renovate the mall to keep up with Four Seasons. At the time, Carolina Circle’s vacancy rate is 10 percent, compared to 1 percent at Four Seasons. Shopper traffic is sagging.

April 9, 1987: Four Seasons opens its new third floor after 18 months of construction. That brings the mall’s repertoire to 200 stores.

June 1988: A $6 million renovation project is completed and Strouse Greenberg unveils the new Carolina Circle Mall.Changes include a new logo, brighter lighting, and a $250,000 custom-built carousel. The owners eliminate the mall’s most distinctive feature: the ice rink. Merchants and skaters are incensed. It was the only ice rink in Greensboro.

Jan. 15, 1991: Robbers shoot and wound a 54-year-old man while he walks out of the mall’s Montgomery Ward store with his two daughters. The incident fuels a perception that the mall is dangerous.

Sept. 11, 1992: Greensboro police open a satellite station at the mall. The city pays $1 a year for the space. City leaders say they hope the station will make shoppers feel more secure. Some Carolina Circle merchants complain that having a police station is a bad thing because it gives visitors the impression that the mall needs a police station.

February 1994: The U.S. Postal Service signs a 10-year lease to put a mail facility in the first floor of the Carolina Circle Belk’s department store. Belk keeps the top floor open as a store.

July 1996: Some of the mall’s bread-and-butter stores -Camelot records and Waldenbooks, for instance – already are gone as Piccadilly Cafeteria says it will close its doors at the end of the month. A few days later Radio Shack says it, too, will move soon. Remaining merchants worry about how they’ll survive.

Fall 1999: Guilford County has tentative plans to purchase the mall and convert in to offices and a community college campus.

January 2002: Carolina Circle Mall is now pretty much completely deserted. All the retailers have moved out, and the plan is that the center will eventually be converted into a new sports and retailing facility. I have my doubts… 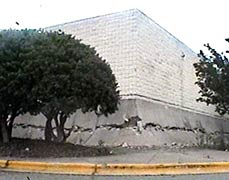 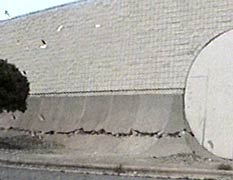 July 2003: There is a sports center, of sorts. Several parking lots are now tennis courts and soccer field. Many of the surrouding banks and other buildings have been converted to storefront churches. The mall building is in a rather sad state of decay.

July 2004: Carolina Circle Mall is to be demolished and replaced with an entirely new retail development anchored by a Wal-Mart Supercenter.

Fall 2006: All traces of the mall, except for one or two outbuildings, are gone. A new Wal-Mart Supercenter occupies the space, and other stores are under construction. 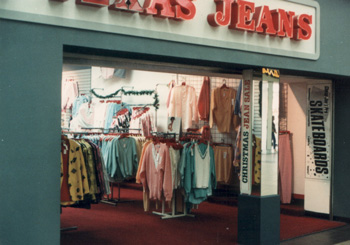 “Texas Jeans” was the name given to mall locations of the “Cheap Joe’s Jean and T-shirt Stores” chain. Malls preferred not have stores with “cheap” in their names at this time. I think there were a total of five Texas Jeans stores (Greensboro, High Point, Columbia SC, and two others) among the fifty or so Cheap Joe’s units. Cheap Joes was a fairly well-known NC chain, selling cheap “youth” clothing, knock-off T-shirts, and its own brand of jeans (Texas Jeans) modelled after Levi’s.

In 1986, the Texas Jeans stores were remodeled and rebranded as “The Exchange” to associate them with the “Surfers Exchange” surf and skate shops the chain had opened in Myrtle Beach and Charlotte.

The Carolina Circle branch was on the lower level next to Hardees and across from the food court and skating rink. The space had formerly been a resturant of some sort, and had a really large back room in what had apparently been the former restaurant’s kitchen. This extra space was used as storage for fixtures and other items for the whole chain.

I’m not sure when this branch opened. It was probably the early 1980s. It closed about 1987 or 1988. The whole company was gone by 1990. I was assistant manager here in 1985, and managed the store for several months in 1986 before moving to Myrtle Beach and then managing the Charlotte Surfer’s Exchange store from 1986 to 1989.

Carolina Circle mall City: A tribute to the late mall.

18 thoughts on “The Ghost Mall”