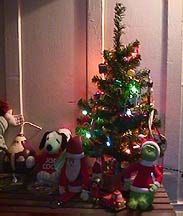 You would have all been quite amused, if also a little frightened. Yer humble host spent an entire 24-hour period in a stunningly good mood. It was so uncharacteristic for me. Thanks are due to several good friends (and to a lesser extent to a pretty danged decent meal, along with Rudolph and the Grinch). I don’t think I grumbled once the entire day, although I did cuss when I burned myself on the macaroni and cheese casserole.

Note to self: throw more parties where you’re the only one in the room who knows everyone else. It’s fun.

The final menu was pork roast, collard greens, macaroni and cheese, pinto beans with onion and tomatoes (and a generous dollop of cayenne pepper), salad, bread, pound cake with strawberries, and assorted cookies and candy. And sweet tea, of course. There was wine and bread and pepermint hot chocolate, and more thanks to Dan and Sarah and Brad and Paula. Steve brought sugar. Mike brought wine glases and Chuck sent a card table in absentia.

I’m not sure what caused this Christmas stiffie I seemed to develop this year. maybe it’s my newfound domesticity. More likely it has to do with this being the first Christmas I’ve spent in San Francisco since 1995. It’s also possible that I was thinking this might well be my last Christmas here.

Whatever the reason, I was happy as a clam all day. I was boucing around the house singing along with Nat King Cole in the morning while I cooked. Dinner was great and the cramped quarters weren’t too horrible. We watched the Grinch and Rudolph and Charlie Brown and Dragnet.

Afterward, I even popped down to the Eagle and manage to have good time even in a public place. Miracles never cease. Of course, Eugene forced me to drink and listen to Blue Oyster Cult and Patti Smith and Al Green until last call, so I felt like death at 8:30 the next morning when my coma came to an abrupt halt, but that’s not a happy story, so I’ll skip it, being that this is an uncharacteristically positive journal entry. I’ll just admit to the world that my recent tea-totalling has caused me to lose my tolerance for booze (and hangovers).

Anyhow, my downstairs neighbor intimated that it was the best Christmas he’d had since moving to the city. That rather made it with the effort, I think.