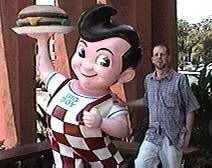 I’ve been to Southern California again and lived to tell about it.

Actually, I like LA, although I stop just shy of loving it. Even acknowledging its existence, of course, is not something most San Franciscans like to do. Contrary to our long-held assumptions, LA is considerably more important on a national (and worldwide) scale and it DOES have culture. I’ve always known this.

I’m even going back in a few weeks for a longer trip. This was a quick trip and was pretty consumed by hanging out with the stars of The WB and chatting up some cute boy from Syracuse at their glamorous party in Santa Monica. We did, however, make it to the world’s oldest standing Bob’s Big Boy in Toluca Lake, and I saw the water tower where the Animaniacs live. LA may be the greatest place in the world for those long, pointless drives I love so. Had a great time, all in all.

Duncan’s still visiting and I’m not in the mood to type, so I’ll hand over the front page to him now:

“Greetings to Planet SOMA and its readers… How y’all doin’?”

Duncan adds that he doesn’t really sound like that when he talks. More soon…