Unfortunately, I didn’t sleep too well. I think it was the heater I’d been so excited about earlier in the evening. It made me stuffy and made my mouth feel like sandpaper. I was a little draggy all day. Didn’t affect our morning farewell to the Sunblock (Sundried?) Inn too much, though.

Breakfast at Jake’s Cafe, featuring four very large pancakes and one very small egg. I cheated on my cardiologist and had coffee. It didn’t kill me, and may have helped make our tour of downtown Los Banos more successful. 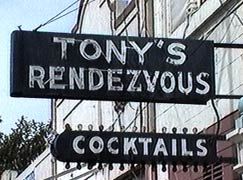 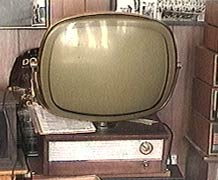 Los Banos is an interesting town, and there’s more going on there than there seems to be any reason for. Downtown is a nice stroll, although we seemed to be about the only people strolling it. Mark almost scored a pair of maroon Chucks and I drooled over a (closed) repair shop full of antique TVs and radios. 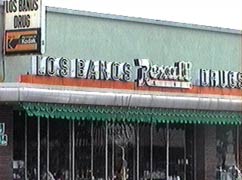 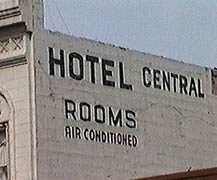 And we sort of wished we’d had breakfast at the lunch counter in the drugstore. Drugstores which smell like bacon are my favorites.

We decided to spend the rest of the weekend in Salinas.

We had two cars and there was no realistic way of orienting this trip other than driving both of them to Salinas. Once again, we decided to meet at a Wal-Mart, maybe because that’s where my road atlas came from, so I have every location in the country at my fingertips. So it was back across Pacheco Pass for me, through Gilroy, and south on 101. We both made good time, and we were both happy to be in a nice, clean, relatively pleasant-smelling Motel 6. 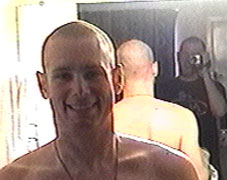 The room required initiation, so we took care of that before doing further exploring. First time for either of us in both Merced and Monterey counties. There were other firsts too. 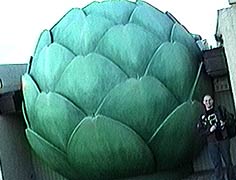 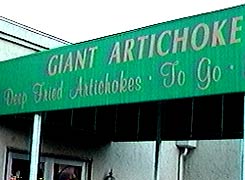 Afterward, we made the drive to Castroville for dinner at Norma’s Giant Artichoke, home of deep-fried artichoke hearts. To say that Norma piles on the food would be a severe understatement. The gastric revenge started in the gift shop (where Mark bought me a way cool miniature shopping cart) and didn’t completely let up until Sunday morning. But there will be no further details. And, lest this sound like a bad review, the food was great. There was just way too much of it. 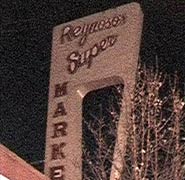 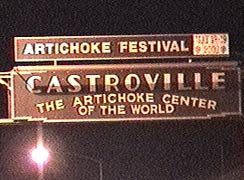 After dinner, we hit Castroville for a few minutes, including a stop where we acted on out mutual passion for older Mexican supermarkets. Then I took Mark on the Salinas neon tour. 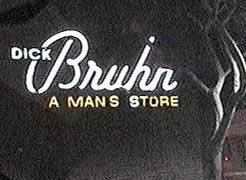 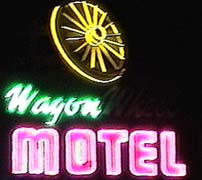 Salinas is an interesting town for fans of neon and old commercial architecture. One section of South Main Street features an amazing bowling alley (with full functioning neon), a former Lucky supermarket, and assorted other oddities. 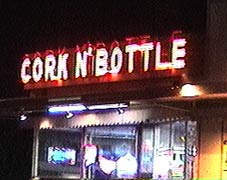 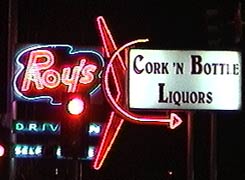 Downtown and North Main are worth drive-throughs as well. 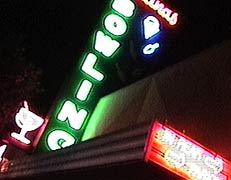 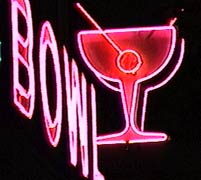 We also managed to scope out our likely breakfast establishment. 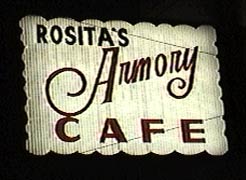 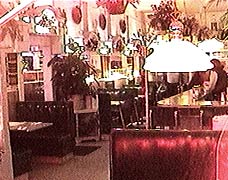 We concluded the neon tour with a somewhat vintage Safeway on Alisal, which I’d photgraphed before in the daytime. I was a little disappointed to see the sign neither illuminated nor spinning, but it was still impressive. 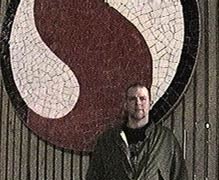 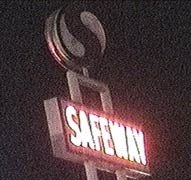 We picked up beer and other necessities at the Safeway and headed back to out Motel 6. We managed to get the heat working after about a half hour or so. And then we settled in and curled up for “Saturday Night Live” and other entertainments. For added flavor, we listened to out next door neighbors having very loud sex. That was fun. We vowed to annoy them by even noisier on Sunday morning.

I was close to comatose by this point from the food, from the previous night’s sleep deprivation, and from my first two beers in about six months. I slept hard.