Gone for the weekend, fleeing the bears, fireworks, and assorted chants and clichés in favor of cafeterias, Googie, and the heretofore unvisited Hollywood branch of Amoeba Records. 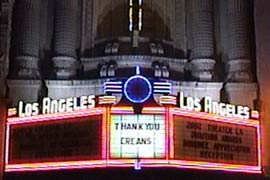 I love Los Angeles. This is not a sentiment which I’ve ever been embarrassed to admit, despite the fact that residents of San Francisco are not supposed to speak such heresy. But for a series of coincidences in 1991, I might be living there rather than here now anyway, and sometimes I still feel the slightest twinge of regret at my decision.

Yes, I realize that the perpetual sunshine and the relative lack of fog or rain would most likely make me suicidal. I understand that the lack of a real pedestrian focus (although there’s more of one than some people realize) might be annoying.

But LA is a city of magic and of dreams, and it holds a fascination for me like nowhere else, except perhaps Chicago and Detroit. It’s a place where I don’t particularly want to live, but where I could spend untold months exploring without getting bored.

Oddly enough, I’d never before had ample opportunity to do this exploring. My first trip was a quick affair, a drive-by on the way to San Diego in 1991. Later trips were always connected with work, either mine or that of a significant other, and never seemed to allow me any time to do what I wanted to do, see what I wanted to see, etc.

Against our better judgment, we left on the Friday afternoon which began President’s Day weekend. It was also Valentine’s Day. Our original goal was to stop by Fresno and see Mark’s sister, but we learned on the way down that she was out of town, so we headed straight for Bakersfield, with a stop in Coalinga and another for a romantic Valentine’s Day dinner at an Arby’s in a truck stop.

This trip would be different. There was no real agenda…