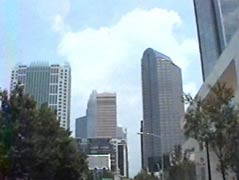 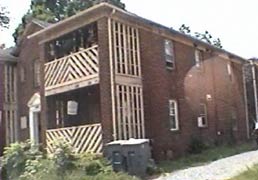 Morning. Breakfast at Bojangle’s. Checked out of the Motel 6, determined to “do Charlotte” in two hours or less. We went downtown. We saw my old house and neighborhood. We expreienced the intersection of Queens and Queens and Providence and Providence. And we found a cool map store at Kings and Morehead. 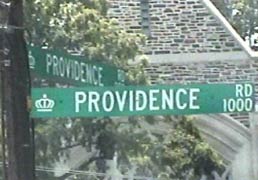 We toured the old neighborhoods around downtown, and Mark commented that he never knew anyplace could be quite so lush and green. I think he liked it… 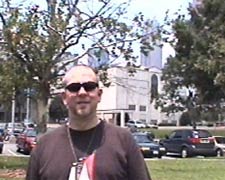 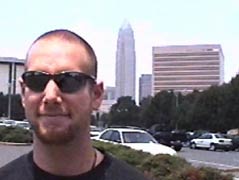 We took pictures downtown and went to the Harris-Teeter in Dilworth (which was one of my “home” supermarkets in the late 1980s), and then we went to Dairy Queen for ice cream. Not just any DQ, mind you, but the “Nanook of the North” DQ on Wilkinson Boulevard. 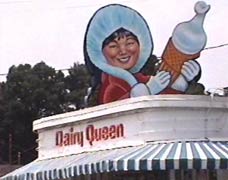 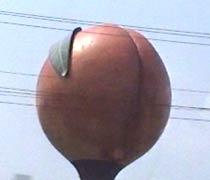 Soon (but later than planned), we were headed south toward South Carolina, the Gaffney peach, and (eventually) Atlanta. Our only obstacles were Greenville/Spartanburg (where we spent an hour locating a K&W Cafeteria) and lots of old, slow people on underdeveloped freeways. 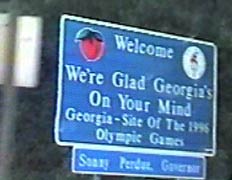 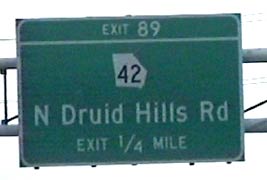 Finally we arrived and checked into our lovely accommodations at the Red Roof Inn where I’d stayed last visit. Only we had a MUCH smaller room. That was OK, since we turned on the TV and heard the news that it was now legal for us to have sex, so we did.

We also heard that day that Lester Maddox (racist former governor of Georgia) and Strom Thurmond (mummified former senator from South Carolina) had died. Maynard Jackson (first black mayor of Atlanta) was also lying in state. Oddly enough, the Supreme Court decsion on sodomy was still the top headline in the Journal and Constitution the next day. 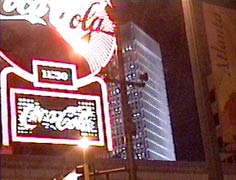 I love Atlanta and have a strange relationship with it, but that’s been covered before. Tonight, after a stop at Kinko’s so Mark could do some work and a lovely dinner from Krystal, we just drove the length of Peachtree Street from Buckhead to downtown. Mark was amazed; Atlanta was a much more urban and cosmopolitan place than he’d envisioned. 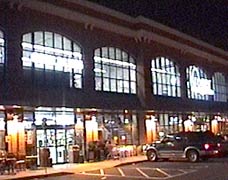 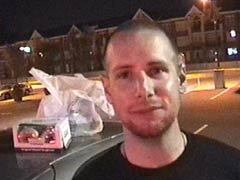 We stopped by the coolest Kroger in the world to get supplies and cash. It was a two-level affair, and it gave me a stiffie, especially when I realized my Ralphs club card worked there. 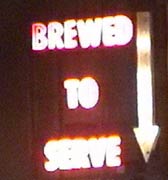 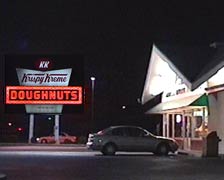 We also detoured down Ponce de Leon and I showed Mark what a Krispy Kreme was supposed to look like. None of this stucco, strip mall shit you see in California, although the counter and stools had been elminated even in this one.

Finally, we were all tuckered out and went home to sleep.