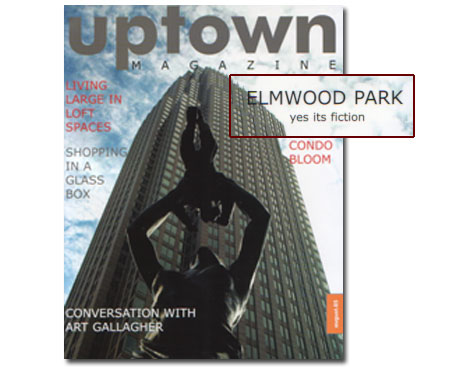 Sometimes I find writing so bad that the only way I can really react to it is to be amused by it. A new Charlotte-based publication, Uptown Magazine, has some of the very best bad writing I’ve seen in a long time. This is excruciatingly, painfully inept prose, the kind of crap that makes you wonder how they could spend so much on the graphic design and the glossy print job while not shelling out one thin dime for a copy editor. 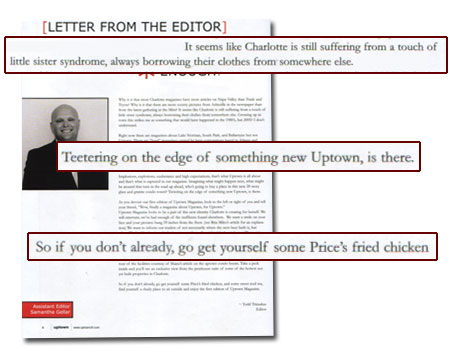 If the conspicuously absent apostrohe and comma on the cover weren’t warning enough, the fact that the editor’s column is almost incomprehensible should be a frightening cue as to the quality of the publication. Let’s take a stab at re-writing the lines above, shall we?

How about “It seems like Charlotte is still suffering from a touch of ‘little sister’ syndrome, always borrowing her clothes from someone else.” for starters? That one was pretty easy. The second one will be harder, since I haven’t the vaguest idea what he’s trying to say. A wild guess would be “Teetering on the edge of something new, Uptown is there.” But I’m just not certain.

And as for number three, I have to ask, “So if you don’t WHAT already?”. Perhaps he’s worried that you “don’t got” some fried chicken. Or maybe, just maybe, he’s trying to say “if you haven’t done it already, go get yourself some Price’s fried chicken.” 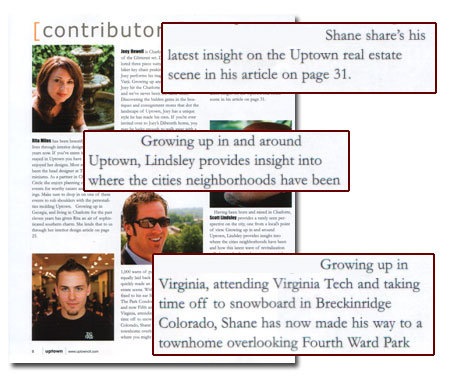 Apotrophes which appear and disappear at inappropriate intervals are among my favorite pet peeves, and Uptown has managed to break numerous rules on one page here. Shane share’s? No. He shares. In this case, he’s also appropriately selfish and keeps his apostrophe to himself. And I think they really mean “where the city’s neighborhoods have been,” although I remain a little unsure.

The rules once again:

It’s very simple. And as for its and it’s, I’ll cross that bridge in a few minutes.

While I’m on this page, though, what’s the story with all these “growing up” clauses? I’ll attempt another rewrite or two here. Let’s go with “Having grown up in and around Uptown” or “After growing up in Virginia”. 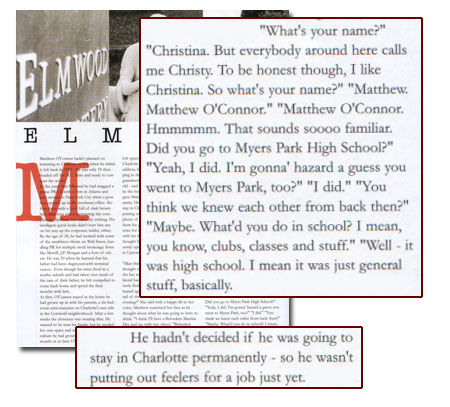 My god. What is that abominable first text box all about? Was one person talking? Two? Seven? And were any of them taking breaths?

When one employs dialogue, it is standard procedure to begin a new paragraph when each new person begins speaking. And if one can’t force oneself to do this, one might at least consider the occasional “Matthew said” or “Christina said” just to give one’s poor readers a clue or two.

And why use an inappropriate hyphen when a simple comma would be fine, not to mention correct? 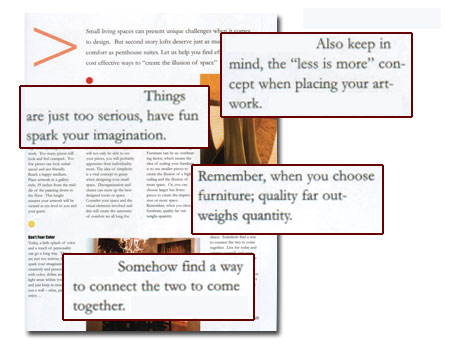 On the other hand, this page is a comma lover’s nightmare. Box number one shouldn’t have a comma at all. Box number three needs its comma, but it should instead be where the semicolon is.

Box number four is just so bloody stupid that it isn’t even worthy of a comment. 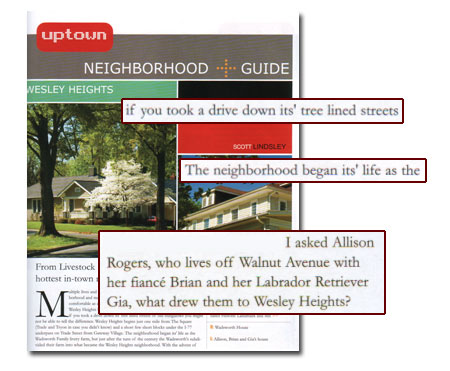 Ah, Cousin It. We meet again…

This might be a good time to deal with some related issues:

And why is there a question mark at the end of that statement in box number three? “I asked Allison Rogers” is not now — nor will it ever be — a question.

I’ve skipped some other glaring issues. I’ve spared you much of the actual writing, which is really bad even on the odd occasion when it’s more or less grammatically correct. And I was kind enough not to point out to the assistant editor that only the President of the United States is capitalized, no matter how much the president of some culinary academy may think he deserves to be capitalized too.

And I write this knowing full well that my own grammar, punctuation, and especially my typing skills are subject to attack. But I’m not an allegedly professional, glossy magazine with advertisers and such, am I?

These are bush league, amateurish mistakes, and there’s nothing whatsoever “uptown” about Uptown. If you can’t afford a copy editor, or a proofreader, or even the grammar checking feature in Microsoft Word, you can’t afford to publish a magazine.