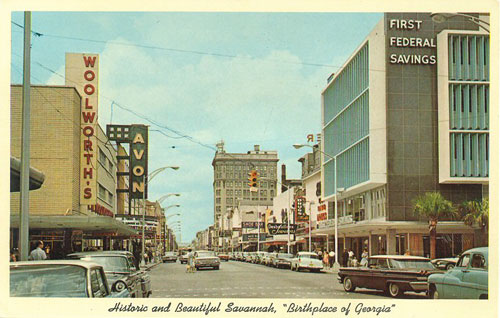 After waiting several hours for Office Max to deliver something several DAYS late, we finally left Charlotte about 1:00. We made it to Rock Hill, about 25 miles south, before realizing that we’d have to go back because someone (who shall remain nameless because this is his website and he has that privilege) had left his wallet on the kitchen counter.

The brief showers that had been predicted for the Carolinas had become thunderstorms and a tornado watch by the time we cleared Columbia, so the drive was extra fun. We arrived in Savannah just in time to be the last customers of the day at the suckiest Piccadilly Cafeteria in the world. We drove around a bit and opted for sleep, knowing Thursday would be better.