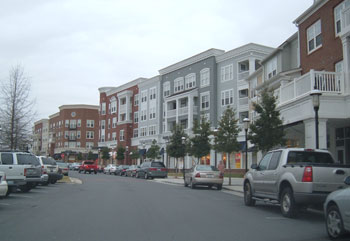 Yesterday, I finally visited Birkdale Village, the Charlotte area’s stab at a “new urbanist” development. Frankly, it didn’t do much for me.

First and foremost, Birkdale, like so many of its counterparts, seems neither very new nor very urban. It’s essentially nothing but a suburban shopping center and apartment complex with a slightly different footprint than most of those built during the past thirty or forty years.

There’s no urban context whatsoever; Birkdale isn’t even in an urban area but in a suburb, and a rather far-flung suburb at that. It has no relationship to the surrounding neighborhoods because there ARE no surrounding neighborhoods. There’s no transit to speak of, there’s no place for residents to work, and it in no way resembles a self-contained or self-sufficient community.

This is not a place where residents can live without their cars and stroll around the neighborhood sipping lemonade and taking care of all their business locally. This is a shopping center, designed for customers who will arrive in automobiles. On top of the stores are apartments designed for residents who will use their own automobiles to get to work somewhere else and to take care of most of their essential business. In fact, there is nothing even so basic as a supermarket here for the use of the residents, although there are several restaurants and a gourmet wine shop.

Here’s a hint: if residents can’t purchase essentials without getting into their cars and driving a few miles to someplace where they can, the developers have not created a “new urban form”. They have created a garden variety suburban development. The fact that it has a few useless upscale boutiques within its footprint does not mean it’s destined to be profiled in urban planning textbooks of the future.

Back in the 1970s and 1980s when I was first studying urban planning, we had things called mixed-use developments (or MUDs). These were projects designed to include housing, offices, and retail. Many of them were built in cities around the country. San Francisco’s Golden Gateway/Embarcadero Center is one example. The famous Watergate in Washington is another.

In fact, MUDs have been probably the biggest trend and discussion topic among urban planners for more than thirty years. This is not a new phenomenon. The primary characteristics differentiating these new projects are location/context and aesthetics. In other words, most MUDs were not designed to look like some contrived version of a small town main street. And — unlike the average “new urbanist” development — most MUDs were located in actual urban areas.

There’s even precedent for mixed-use in the suburbs. Many of America’s regional malls were developed in conjunction with housing and offices, both onsite and directly offsite. Stonestown in San Francisco and Cameron Village in Raleigh NC are good examples. In fact, many apartment complexes and subdivisions were designed specifically to provide traffic for the shopping center; it was assumed that the retail and commercial space rather than the residential would generate most of the long-term income and profits.

So what is it?

In fact, some new urbanist shopping centers succeed quite well from a design perspective, even if they do read as sort of a cartoon version of an urban center; San Jose’s Santana Row is a quite attractive example. Birkdale doesn’t really succeed on this level either; the facades lack variety and visual interest, the building heights are not sufficiently varied, and the central court (extended for more parking) is too wide to really simulate a streetscape. The whole effect is rather cheap looking, but it’s as acceptable a design as any other generic suburban shopping center.

In the end, though, the shoppers come from all around, the residents don’t end up doing most of their shopping (or working) within the center, and — contrary to the lofty goals of the new urbanist — the car still reigns supreme. In addition, I imagine many of the residents, confronted with the continued necessity of owning a car, evetually resent paying a premium for apartments where they have to compete for parking spaces with all the shopping center visitors, not to mention having to fight traffic within the complex when leaving it to do their grocery shopping. 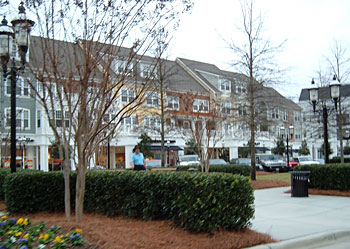 I can see some logic behind new mixed use developments in urban areas and even denser suburbs when they are located near transit or jobs or both. I’m not a real fan of big developments, but they can function as a integral part of some neighborhoods when well designed.

I emphasize the word “part” here. It should be remembered that these developments will achieve their stated goals only when they are integrated within an existing urban fabric. Most current examples purport to be creating their OWN urban fabric, which is preposterous. You can’t build urban texture from the ground up, no matter how carefully planned the footprint nor how contrived the architecture.

In closing, I’ll say that I don’t believe that developments like Birkdale Village are bad. They’re really no better or worse than any other suburban shopping center with an adjacent apartment complex; only the footprint and aesthetics are different. They’re fine, really.

However, their only benefit to society seems to be that they provide developers with a somewhat higher profit by allowing them — with an unprecedented level of support from the planning commission, the design review board, and the local press — to build both a shopping center and an apartment complex on the same parcel of land where only one or the other would have been approved in years past. This is generally a good thing, but it’s not going to make urban planning history…