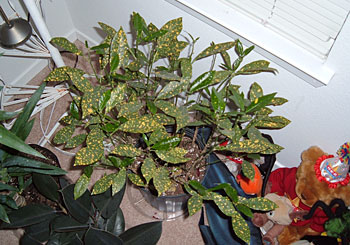 After a very sketchy first few months, where she often looked a little like Charlie Brown’s Christmas tree, the plant above suddenly seems to be thriving. Apparently, she’s found her preferred solar angle. I haven’t named her — nor any of the other new kids yet — partly out of respect for the ones I left behind, and partly because, you know, once you name them and start feeding them, it’s extra hard when you lose them.

I think this one’s going to make it, though. Ultimately she’ll be one of my favorites since she had to work so hard and all. She might get a name very soon.