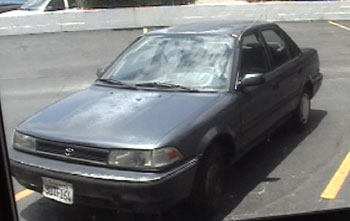 I like my car. Despite the bad shocks, disintegrating paint, and a few cranky moments during the past year (most of them, alas, while we were in the process of driving cross-county), it’s been the most dependable car I’ve ever owned. And it’s very happy when it has new tires and I take it on a little road trip like today’s drive up to Winston-Salem.

My 1991 Corolla already had more than 50,000 miles on it when I bought it nine years ago, and I’ve upped that total to nearly 160,000 now. It survived eight years in The City of Doom. It’s taken me cross-country in 1997, 1998, and 2005, from one end of California to the other (and everywhere in between) on numerous occasions, to Portland and Seattle and Vegas, and more. And it’s only given me real trouble a few times: requiring a major tune-up in San Diego, a new muffler in Fresno, and a tiny rubber o-ring in the middle of Texas. Other than that, it’s all been routine maintenance, tires, and brakes.

I’m not the sort who feels the need to express myself through my choice of vehicle. My penis is of average size, but it’s large enough that I don’t need a monster truck to make me feel better about it. I’m very materialistic, but that’s more about “stuff” than about expensive cars. And while I like a nice, comfortable car, a hand-me-down Oldsmobile or Buick would be quite sufficient. And you couldn’t pay me to drive an SUV, because they’re ugly as shit and handle like tanks — and use almost as much gas.

My car looks like hell, and the shocks are pretty much gone, as is the radio. I guess it’s probably not realistic nor cost-effective to fix these things, but I can’t help thinking it’s got another five or ten years left in it all the same. Either way, I admit I’m going to be a little sad when its time finally comes; I’ve had the damned thing almost as long as I’ve had this website, and several years longer than I’ve had Mark, although I have to say I like him better.