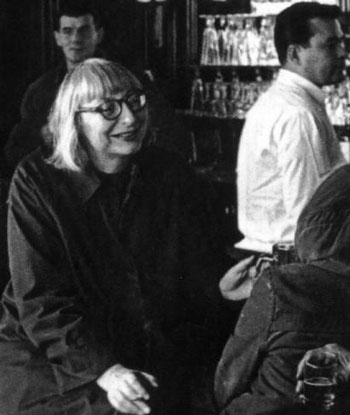 Today, some very good things are happening for me, which I’ll talk about at some later point.

But I’m also very sad. Jane Jacobs, who was without question the past century’s most important voice on urban planning and other issues died this morning in her adopted hometown of Toronto. It’s difficult to express how much her ideas and writings have influenced the way I think about cities. And I think about cities a lot, so she was a pretty major figure in my world. Jane Jacobs was one of those few famous people on earth I would really like to have met and talked with at some point in my life. In fact, she was probably number one on that list.

This paragraph from The Death and Life of Great American Cities, originally composed in 1961 to describe the destruction wrought by the urban renewal programs of the previous decade, rings even truer today:

But look what we have built with the first several billions: Low-income projects that become worse centers of delinquency, vandalism and general social hopelessness than the slums they were supposed to replace. Middle-income housing projects which are truly marvels of dullness and regimentation, sealed against any buoyancy or vitality of city life. Luxury housing projects that mitigate their inanity, or try to, with a vapid vulgarity. Cultural centers that are unable to support a good bookstore. Civic centers that are avoided by everyone but bums, who have fewer choices of loitering places than others. Commercial centers that are lack-luster imitations of standardized suburban chain-store shopping. Promenades that go from no place to nowhere and have no promenaders. Expressways that eviscerate great cities. This is not the re-building of cities. This is the sacking of cities.

She was equally comfortable fighting leftist utopian and right-wing anti-urban foes. She stood up to Robert Moses and won, something no one had really attempted before. She wrote a book that should be — and now, finally, is — required reading for anyone entering the field of urban planning. She just “got it” in a way very few people ever have.

The world needs a Jane Jacobs in it as much (or more) today as it did forty years ago. She will be very much missed.