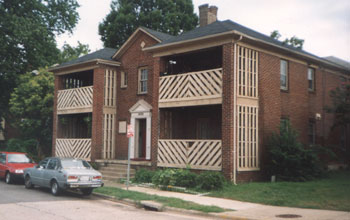 I took a bit of a sentimental journey on Monday. Ever since I moved back to Charlotte last year, I’ve been curious about my old apartment, the one I rented in 1988 and 1989 and have always thought of as my favorite apartment ever. As it turns out, the very same apartment became vacant this week, so I popped over to the real estate office, checked out a key, and took a stroll down memory lane, as it were.

That particular period of my life is sort of “lost” for me now. I have very few pictures, and absolutely none of this particular apartment. I was very drunk very much of the time, and I’d also stopped doing much in the way of journal entries. So I’m always interested in finding little tidbits that will jog my memory of that last year in Charlotte. 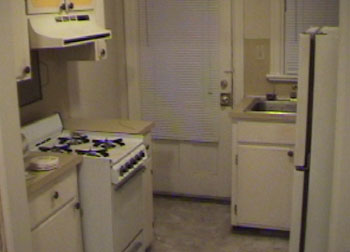 I found that my somehwat run-down flat was now in even worse shape than in 1988. What looked to be the very same shit-brown carpet (with the very same stains) covered the floors, and the very same old window-unit air conditioner was in the bedroom. The bathroom was filthy, and the kitchen sink had the rust stains which come from years of tenants who aren’t very proactive about washing the dishes. There was a new thermostat, but it was powering the same old wall-unit furnace. Mysteriously, the relatively new (in 1988) bedroom door had been replaced by a much older one.

But the place still had its endearing qualities. It had a nice layout and a great location, and there were more closets than you usually find in apartments from that era. This one-bedroom pad was about the same size as the two-bedroom place where I spent thirteen years in San Francisco, and wasn’t in much worse shape. It rents for $450 now, up from $250 when I was there in 1988. I wouldn’t live there now, but I don’t question my decision to do so back then, either.

I think I was expecting some mystical, quasi-religious experience, sort of like when George visited the tenement where he grew up on that Christmas episode of “The Jeffersons”. It didn’t end up being quite so emotional, really, but it did offer some intersting perspective on how my life has changed in light of our upcoming move. I enjoyed being an “edgy” 24-year-old. I think I’ll enjoy being a boring 41-year-old with a house (and without a hangover) even more.