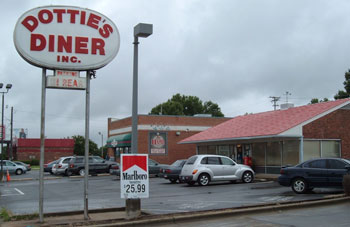 Dottie’s Diner on Stratford Road will be closing this weekend.

Open since 1990, the place still bears a strong resemblance to its predecessor of 30-plus years: Your House, a central North Carolina chain that operated from the 1950s through the 1990s. At least one location is still open, on Greensboro’s Battleground Avenue in a replica of its original building. Your House was a 24-hour diner, something of a knockoff of the Toddle House and Hull-Dobbs chains that were found all over the country in those days, and a precursor to the Waffle House of today.

I grew up eating at the Your House on High Point Road with my dad. We’d very often go there on Saturday mornings for waffles. My dad would meet his friends there in the evenings to sit at the counter, chat, drink coffee, and harmlessly flirt with the waitresses. In my early twenties, I’d go there with my own friends for the double cheeseburger that seemed so necessary at 2:30 in the morning after a night of drinking cheap draft beer somewhere.

I’m not entirely sure where I’m going with this except to say that these little diners are the real 1950s diners, and not some gay-ass imitation with fake neon and old records nailed to the wall. A sizable portion of our male population once got a significant portion of its sustenance from them, and from places like these, and it’s sad to see these little dives go.

I’ll also miss it because it was one of the first places Mark and I ate breakfast in Winston on one of our first exploratory trips here last winter. And they have really good grits.