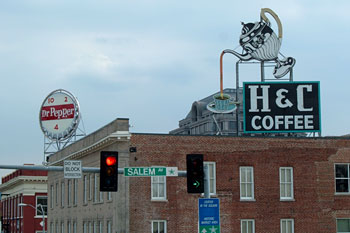 I drove to Roanoke, Virginia this afternoon. Roanoke is pretty. I’ve spent some time there in the past, but not a lot. We used to drive through a couple of times a year on the way to West Virginia when I was a kid. I had a weekend-long affair with a boy in a semi-dumpy 1940s motel there sometime in the mid-1980s. And my friend Duncan and I drove up there one afternoon from Greensboro to have dinner at the K&W, after which we drove right back.

This time I took a pretty good tour. It’s a cool place, one of those cities that was obviously much more important eighty years ago than it is now. It has a rather sprawling old downtown surrounded by some interesting neighborhoods in varying stages of decay, gentrification, or both, all set in a semi-mountainous backdrop. All in all, it’s a little reminiscent of Asheville, but without all the annoying hippie granola shit going on.

I like Roanoke. I may post more pictures tomorrow. It’s really nice revisiting these smaller east coast cities, many of which I largely ignored when I lived here before. Seeing them with my newer perspective — shaped by years of urban travel all over the country and by having lived in a major urban area — is like seeing them for the first time all over again. Seeing them in the daytime, while sober, enhances the experience somewhat as well. I missed a lot the first time around, although I wouldn’t trade my misspent youth for anything, really.