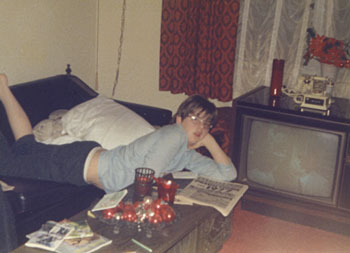 I ran across this cool bunch of stuff from my childhood while looking for something else today. The interesting thing is that I didn’t spend my childhood in the Tampa Bay area. I was in the area, at most, for about a week or so each year when we visited my aunt and uncle there. And I STILL remember this whole campaign, from that breezy “WTOG, as far as the eye can see” jingle to the “extended remix” instrumental versions. In fact, I’d actually looked for some of this stuff online before.

WTOG was one of those great 1970s independent stations, all of which were remarkably similar despite their lack of a network affiliation. Mornings were always given over to black-and-white sitcom re-uns from the 1950s, an assortment which always included “Father Knows Best, “Leave It to Beaver”, “Dennis the Menace”, and “I Love Lucy”. Afternoons were about “Speed Racer”and “Brady Bunch” re-runs, and primetime was invariably filled with either a movie or Merv Griffin, followed by “Marty Hartman, Mary Hartman” at 11.

any of these stations later became the first round of Fox affiliates. Some, as of this week, have traded The WB orUPN for The CW or My Network TV. Very few, I imagine, have “Father Knows Best” reruns or a jingle that 10-year-olds will remember thirty years from now. KOFY in San Francisco may have had the last one of those.

I watched way too much TV when I was a kid. Even when I was on vacation.