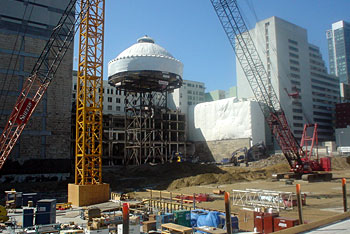 Far be it from me to rain on San Francisco’s parade, but — with the exception of this one — almost every story (and video) I’ve seen about this week’s opening of new mall on Market Street suggests that it was some sort of historic preservation triumph that saved the old Emporium store.

Despite all the grand pronouncements from city leaders about how great it is to be standing in the middle of it, there is no Emporium store left. It was torn down in 2004. The only things that remain from the building are the Market Street facade and the interior dome, and even the dome has been relocated. No other walls were spared, nor was anything else other than these two architectural features.

It’s nice that SF has its spiffy new mall, because heaven knows San Francisco needs nothing quite so much as it needs another mall. It’s lovely they integrated these features into the new building they built. But the old Emporium building is not there anymore. It’s just plain silly to pretend that it is. I won’t make an argument about whether that’s good or bad, but can someone please at least acknowlege that it’s a fact?