Skip to content
David My Other Sites, Reminiscence and Reflection, The Married Years 7 November 200623 September 2008 2 Minutes 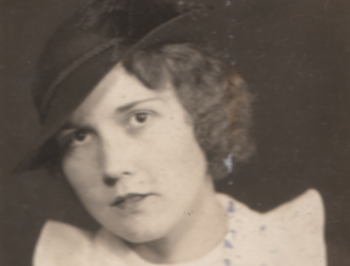 Aunt Lucille was always one of my favorites. She was my grandmother’s sister and she was a member of of that last generation of semi-helpless and often rather silly southern ladies. But Aunt Lucille wasn’t like that. Unlike her sister and many of her contemporaries, she drove a car and had a full-time job all her life. She was independent. And she had a sense of humor, something that was also in short supply among southern women of her generation.

She was a sweetheart in every possible way. She was not overbearing; in fact, she even seemed rather humble, but she could exhibit a very refreshing sassiness from time to time as well, which I think the photo above captures. She didn’t like to moralize; she liked to laugh. I know she helped my mom through some very rough times as a little girl during the Depression, and I suspect my mom wasn’t the only family member to benefit from her presence.

Similarly, my generation of the family never dreaded being around her as we did with certain other relatives either. Aunt Lucille was firm, but she was also unfailingly upbeat and happy. She didn’t exactly “spoil” us, but neither did she spend all her time telling us what bad manners we had for not saying “yes, ma’am” in a snappy enough tone, or telling us how coddled we were. If you’re of roughly my generation and grew up in the south, I think you know what I mean here. We acted our best around her because we respected and loved her, not because we were afraid of her.

When Mark met her a few years ago, at the end of an arduous day of relative-hopping, he remarked that she seemed younger and livelier and happier than anyone he’d met that day, despite the fact that she was ten to fifteen years older than any of the rest, not to mention already in failing health. Aunt Lucille was never one to piss and moan and complain about her assorted maladies and aches and pains, even though she definitely had her share of troubles through the years.

I last spoke to her on Thursday. She asked about Mark and about the new house, and told me she loved me. When I saw her again on Saturday, she wasn’t talking anymore, but she still held my hand.