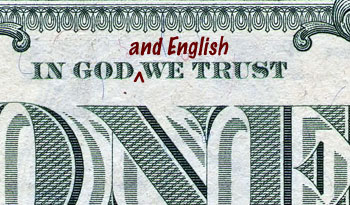 The big controversy in Charlotte this week is about the appropriateness of saying the Pledge of Allegiance in Spanish. Of course, you’d think the flag-waving nationalistic types would be ecstatic that people want to recite the stupid pledge at all, but they’re not.

I guess it’s all about empty symbolic gestures, like the insistence that one swear oaths in court (or oaths of office) with a hand on the Christian Bible. Why on earth would anyone want me to swear on a book that means about as much to be as “Aesop’s Fables” or “Tom Sawyer”? Apparently, conservatives reactionaries prefer a memorized, insincere expression of loyalty and truth to an honest and uncoerced one.

My suggestion: all official business in the United States must be conducted using Olde English, since that’s the language God spoke when he and King James first wrote the Bible back in 1611. Thus, it’s God’s “official language” and therefore it should be ours.

This is, after all, an English-speaking, Christian nation, just like it says in the Constitution, right? Oh come on. You know it’s in there somewhere. Maybe toward the back…