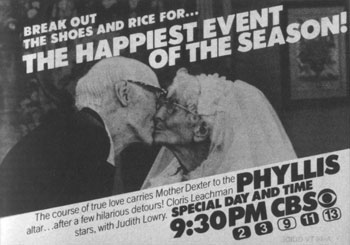 Tonight, in honor of the season, I’m celebrating May Sweeps. May Sweeps 1977, that is. These are taken from actual May 1977 issues of TV Guide, part of my sizable collection with which I’ve recently been reunited.

I remember 1977. It was the year the Brady Bunch embarassed themselves and their fans by doing perhaps the worst variety show in the history of network TV. And I watched every episode, for some reason. Masochism, I guess. Or a crush on Peter… 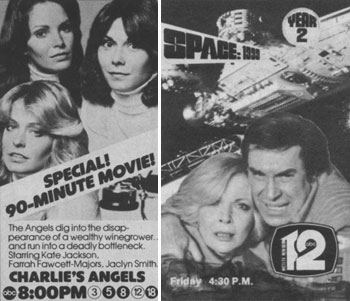 Yes, it’s the original Charlie’s Angels, and a special 90-minute episode, at that. And who remembers Space:1999, featuring the grooviest spaceship decor ever, stuff that I would have killed for in 1999. Or now. 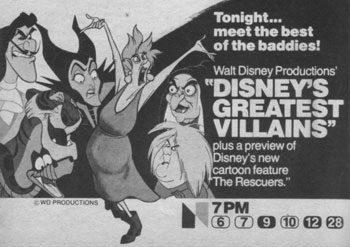 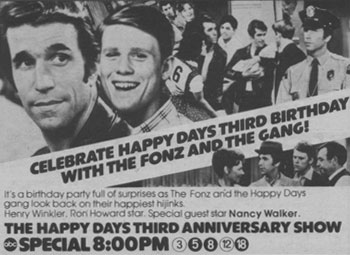 The third anniversary of Happy Days. As I recall, that was about the time the whole cast got tired of having 1950s haircuts and started sporting a strange sort of Brylcreem and Blow-dried hybrid look. 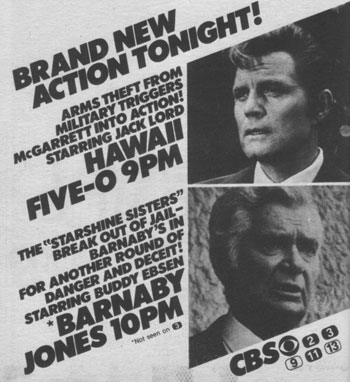 Funny, but the term “brand new action tonight” in an ad makes me think of just about anything but Barnaby Jones. 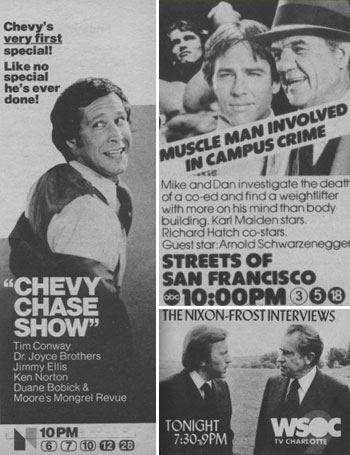 Doesn’t it stand to reason that if it’s Chevy’s very first special, it would, by definition, be “like no special he’s ever done before”? Or is that the gag? I’m sure, though, that it must’ve bombed against the Arnold Schwarzenegger episode of The Streets of San Francisco.

Ah, 1977. When network TV still mattered. Except of course for Space:1999 and the Nixon-Front Interviews, which were syndicated shows. Had to add that for accuracy’s sake.