Some thoughts after a little road trip surrounded by lots of Christmas music on the radio:

First, I could listed to the hippopotamus song all day long. Really.

Second, if I ever again have to sit through the goddamned song about the kid who wants to buy his dying mama some new shoes “in case she meets Jesus tonight”, OR the monologue where Santa breaks down and cries upon finding himself in some soldier’s depressing, dingy apartment, I will probably end up ripping my ears from my head while simultaneously vomiting all over everything in sight. Which probably won’t be pleasant for me nor for anyone else in the vicinity.

That said, this one’s still the best. 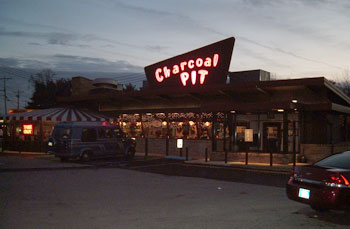 More about the actual road trip soon, but the picture above is where I had dinner Wednesday night. Any guesses where I was?