There’s this crazy lady at work. I’ll call her “Agnes” even though that’s not her real name. Agnes is about sixty years old, and is a recent migrant from upstate New York.

Agnes is all about gloom and doom, and can convince you that the most benign ailment or medication will undoubtedly be fatal. She also has an (ill-informed) opinion on nearly everything, and loves to rant, on subjects ranging from the natural superiority of northerners over southerners to the way that lazy immigrants or assorted minorities all try to get something for nothing. Of course, she uses cloaked terminology to show that she’s no racist. Interestingly, she also never hesitates to pad her own time card when the opportunity arises, but that’s another story, I guess.

Yesterday, Agnes was in a political mood. Somehow, we got on the subject of the national drinking age. Agnes, interestingly enough, believed that 18-year-olds should be allowed to buy alcohol, and I agree. However, Agnes doesn’t think they should be allowed to vote. Her rationale? They haven’t had time to learn how hard their parents had to work to earn money and they “don’t know their asses from a hole in the ground”. They need, she asserts, to experience the “real world”.

No, I didn’t really get the connection, either.

Ignorance is most definitely not limited to the young. And most 18-year-olds spend those essential years between 18 and 20 in college — not exactly the “real world” by Agnes’ standards nor anyone else’s. I’m also unaware of any Constitutional requirement that voters exhibit any particular level of financial maturity. There’s certainly no similar requirement that the candidates exhibit such maturity.

When I pressed, Agnes went into a tirade about all the problems Clinton caused when he “allowed all the 18-year-olds to vote back in the 1990s”. I calmly informed her that (a) an American President does not have the power to “allow” anyone to vote or not vote, (b) that a Constitutional amendment was required to change the voting age, and (c) that this amendment had been passed in 1971, two decades prior to the Clinton administration. Apparently, I knew more about the Constitution at age 18 than she knows at age 60. Sort of throws her argument out the window, doesn’t it?

I mention this not because Agnes is a blowhard and a bit of an idiot, which she is. I mention it because her lack of knowledge about how government works and her complete absence of critical thinking skills are, alas, not particularly uncommon. Like so many people who don’t want to engage in intellectual exercise, she believes what she believes no matter how faulty her premises. Facts are not going to change her mind. Clinton is the antichrist. Immigrants are evil drains on our economy, language, and culture. No one is “allowed” any fundamental liberty she finds distasteful — but no one better deny her right to do anything, since all her personal pursuits are completely pure and moral. Agnes prides herself on being patriotic, but she doesn’t know a damned thing about the Constitution, and probably has never even read it. Flag-waving nationalism and a little bit of dogma with a Bill O’Reilly chaser is apparently enough for her.

Unfortunately, Agnes is America: intellectually lazy, uninformed, and too willing to be told what to think. I don’t say this because her views are “conservative.” There are just as many, if not more, left-leaning lemmings about (witness San Francisco). In fact, I’d argue that a majority of the most vocally opinionated folks in the country have absolutely no intellectual basis for most of their very closely-held opinions. It’s a lot easier, after all, not having to do the work of thinking for yourself, and never stopping to ponder why you believe something.

Most people take the easy way out. Give them an “Obama is a Muslim terrorist” email message, or a “Proctor and Gamble is owned by devil worshippers” form letter and most will either not care or just be too fucking stupid or ignorant to evaluate the source and context. And most politicians are quite aware of this. Explains a lot, doesn’t it? 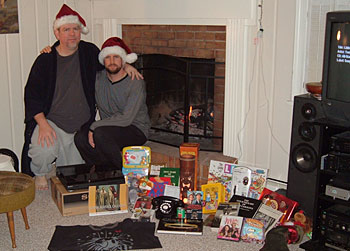 All in all, it was a good Christmas. Mark was gone pretty much the entire month of December, a victim of year-end accounting at work. That sort of sucked, but we had our romantic rendezvous on the 23rd when I flew into San Francisco. Despite all my dread over flying at the holidays, the whole process was much more tolerable than I’d expected, thanks to a series of happy coincidences that resulted in very favorable seat assignments.

A few hours after I arrived in SF, we were on the way to Fresno to spend the holidays with his family. It wasn’t really any warmer in Fresno than it had been in Winston-Salem when I left, but it was quite a bit foggier. That made me happy. 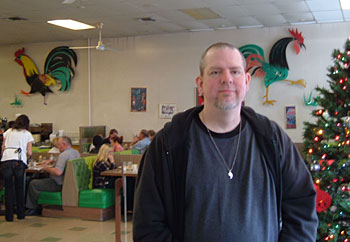 There was Christmas Eve breakfast at the Chicken Pie Shop and random Christmas shopping before dinner at the home of the sister-in-law and family. I’m not showing pictures of our niece here, just because I think it might (understandably) creep out her mom a bit, but she’s adorable — trust me on this — and she also shared her crayons with me. 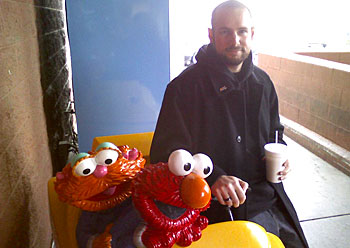 There was more food and family on Christmas day, and then we departed on the 26th for a quick one-night stand in San Mateo, where we had dinner with Dan, Jamie, and Eugene at Pancho Villa and then wandered around downtown and made the staff at Draeger’s nervous before bedding down in preparation for my really early flight the next day. The return flight, alas, was not nearly so pleasant as the westbound one had been. 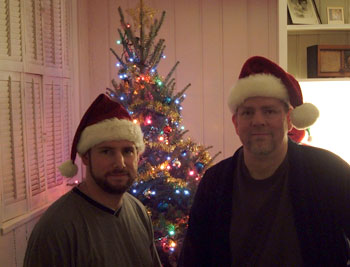 The cool thing, of course, is that we got to have Christmas again when we got home: twice. The first was the traditional “fire in the basement” Christmas at home, where we gave each other our loot. For the record, I got a turntable (we’re now a two-turntable household), and lots of cool books and videos, among other things. We also got a quite wonderful vintage phone from Sister Betty and the happenin’ tiki lamp from Jamie. 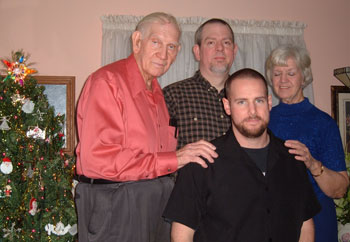 And then, we got to go to Greensboro and do it all over again with my parents. Despite the picture, my mom really did have her eyes open through most of it, which we all appreciated.

Mark left this morning, and I have to take down all the decorations this afternoon. So I guess it’s over now, and it’s time for me to get back to the daily grind.

Maybe some day soon, I’ll even post pictures from the last two road trips. Right now, though, there’s a whole slew of exciting new shows on The CW and My Network TV that are just dying to be promoted online. And there’s a certain university bureaucracy that needs a cattle prod jammed up its ass. But that’s another story… 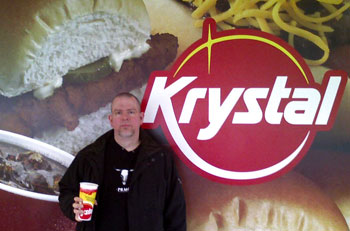 “So what did you and Mark do Saturday night?”

“We went out for dinner, and then saw a movie”.

“That’s nice. Where did you go for dinner?”

I sort of got the big geeky digital preservation bug tonight, and finally converted eleven-plus years of email — half of it in the old Eudora mailbox format — into the current Apple Mail format. It was harder than it sounds; this nifty little open source uttility was a big help. But now, I can read and search messages gong back to 1996, and they’re in what I believe to be a much more sustainable format.

Of course, such a project also meant I spent a little too much time reading old email. That’s always fun.

In case your inner geek is looking for some stimulation, note that the Eudora site above includes installers for some really old versions of that now-defunct email client for your amusement.

After dealing with one mini-catastrophe after another the past few days, I can no longer live in denial of the fact that (a) my primary hard drive is in fact failing, albeit in a slow and lingering sort of way, and (b) that my assorted patched and coping strategies are no longer working.

The replacement arrived from MacMall today, and its 500GB will double my capacity inside the G5 tower. I don’t anticipate drama, but if you don’t hear from me for a few days, you’ll know why.

Just in case I miss it, I’ll wish myself a happy anniversary right now, two days in advance of the actual date. I can’t believe I’ve been doing this for twelve years now… 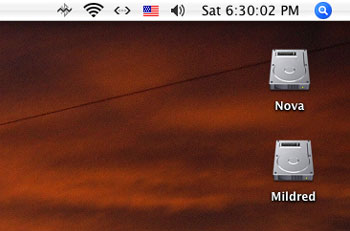 Success! And with no discernible data loss.

The new drive is quiet and big, and I’m very happy to be in the Terrabyte Club, even if it is spread over two different internal drives.

Let me clarify my earlier statement: no discernible data loss except for some problems I had with Apple Mail.

And let me also clarify this: I don’t find it particularly complimentary when people bark at me, so please don’t assume I’ll be flattered if you say (or type) “woof” to me, no matter how affectionately it’s intended.

One more thing directed at my three (two? one?) remaining San Francisco readers: can someone please offer my husband a room? He’s really nice, and he never does stupid stuff like smoking pot or peeing on the carpet. 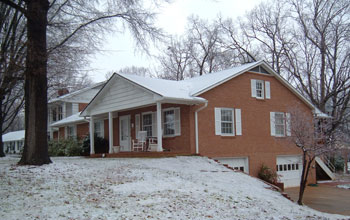 It wasn’t major, but it was the first relatively decent snowfall I’ve seen since moving back east two and a half years ago. Which sort of sucks. I remember when I was a kid that we always got a couple of fairly good snowstorms every winter, usually in the 3-4 inch range and very often more than that. Come to think of it, it seems like we even used to get one every time I came home to visit when I was living in San Francisco.

I guess we’re in a bit of a warm phase now. Maybe it will go away soon. 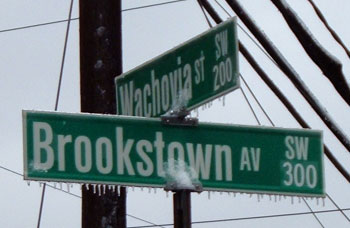 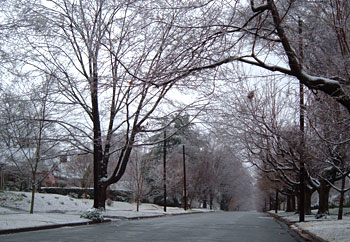 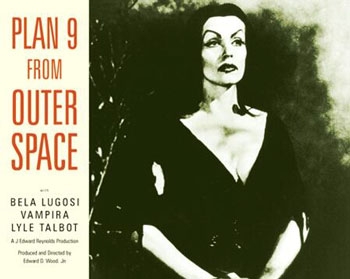 Apparently, some vampires actually do die. I’m sorry it had to be this one, though.

This is cool. Not only is there now an easy way to download FLV files (via the otherwise useless new Real Player 11 Beta), but there’s a Quicktime plugin that allows them to be edited and converted into a format that’s actually useful.