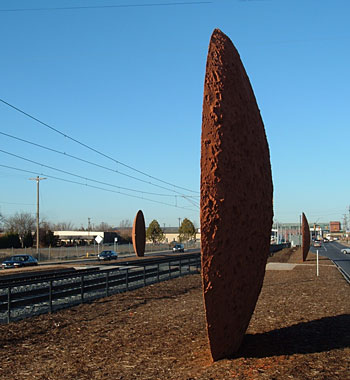 What is this obsession Charlotte has with vaguely ridiculous-looking disc-shaped public art projects? First, there was the giant sand dollar thing at Trade and Tryon, then the interlocking onion rings at Wendover and Randolph, and now this new (cough) installation, which can only be described as some sort of cubist primitive version of Stonehenge on South Boulevard: Charlotte’s own mysterious homage to the mythical power of the contact lens.

It’s really bad. There are like eight of these things spaced along two sides of the new light rail line in a particularly ugly stretch of South Boulevard. Suffice to say, they add nothing whatsoever to the aesthetics other than to offer passing commuters a little chuckle thinking of the swindler who got paid for the damned things.

I’d like to think these projects are maybe rooted in some sort of resentment of public art requirements, but I fear that’s not the case. Even more, I fear that someone actually took this merde seriously.