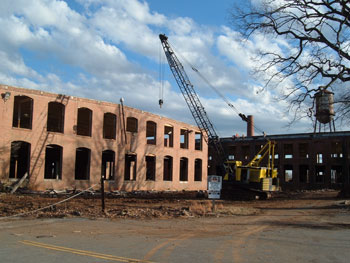 This was a pretty sad sight I wasn’t really expecting to see today. They’re tearing down the old Pomona Mill in Greensboro. This was less than two miles from the house where I grew up, so it’s a landmark I used to pass pretty much every day, and one that I’ll definitely miss.

By the time I was born, the building was being used as a Western Electric plant. By the time I was in high school, it had been converted into an outlet mall that never quite took off; that closed probably ten to fifteen years ago. The building had pretty much been vacant since then, I believe.

As far as I can tell, there aren’t any plans for the land. It’s in sort of an awkward location which isn’t really appropriate for retail, and the surrounding neighborhood isn’t sufficiently picturesque for it to be converted into lofts for the “faux urban” crowd. I imagine they’re tearing it down because they think the land may sell quicker that way, and they’re probably right.

All the same, I can’t imagine what they might build in its place, and I’m sure going to miss my old mill.