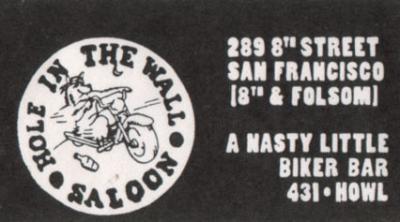 The South of Market area was a pleasant enough place to drink (or debauch) for much of the 1990s, particularly if you were a Sodomite looking for a scene that was a little less antiseptic and generic than the Castro. Following ten years of AIDS paranoia in the 1980s, the final decade of the twentieth century brought a return to openness about sex and a renewed vigor to South of Market nightlife.

The really great thing about the 1990s, though, was that the universal soundtrack did not consist solely of the same stale old disco divas and other “high NRG” dance tracks that had defined (defamed?) the term “queer bar” seemingly since the dawn of time.

Starting with the Lone Star Saloon — which was, incidentally and accidentally, the first queer bar your humble host ever visited in San Francisco — there was actually music featuring guitars being played in South of Market nightspots.

There had been other rock and roll or “alternative” theme nights, of course, including Junk (one of my favorites) and Jesus at The Stud, and one whose name I can’t recall at some club in Upper Haight. And Michael Pandolfi had done some semi-regular sets at Detour in the Castro. But the Lone Star was the first queer bar in San Francisco to look at the genre as a regular everyday format. 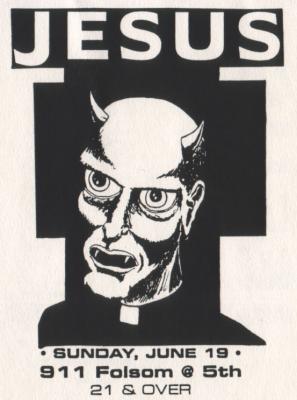 And on 15 April 1994, the Lone Star’s stepchild opened its doors at Eighth and Harrison as the appropriately-named Hole in the Wall Saloon. This tiny bar, which had formerly been a nondescript joint called The Borderline, was soon to redefine nightlife south of the slot with live DJs spinning rock and roll, and an attitude to match. It started slow, and early on, it was possible to find yourself surrounded ny maybe no more than a dozen other patrons on a Friday night. But by 1996, there were lines out the door every weekend. Too many of those waiting in line, alas, were slumming yuppies of the “see and be seen” variety who just didn’t get the concept. All the same, I had a lot of very interesting and very intoxicated nights there. Of course, it helped that my roommate was a bartender.

Eventually, the owners of Hole in the Wall also took over the SF Eagle, finally ridding the famed leather bar of its dreary lineup of bad, muffled dance covers (did the world really need a disco remake of “Smells Like Teen Spirit”?). In the new space, they even hosted live bands on occasion, while both bars had live DJs most nights. My Place, which was more notorious for sex than rock and roll, also got into the act on certain nights when the right bartenders were working.

My Place is gone now, but as far as I know, the other three bars are still plugging along, although things never seemed quite the same after the gentrification of the late 1990s. The Lone Star moved more toward the whole generic bear bar thing, and was playing a disturbing amount of country music when I stopped caring about 2001. And I read of some controversy over a potential relocation of the Hole in the Wall Saloon last year, but I’m not sure if anything came of it or if the relocation ever happened. To be honest, I’m 3000 miles, and many years, away from all that now, and I don’t really care too much anymore. Heck, I don’t even drink anymore.

One thought on “Rock and roll queer bars”