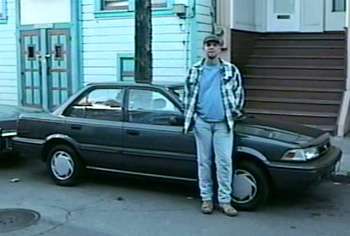 I’ve been holding off on writing about this because it makes me sad.

About a week ago, I was driving home from work, and I noticed that my car was making sort of a clicking noise, and it wasn’t accelerating very well. It was also idling really badly. Mark and I were leaving town that night, so I didn’t think much about it until Monday morning, when I took it into the mechanic. He told me the engine was “just about shot” and didn’t really elaborate, but charged my ninety bucks for the diagnosis. So I then took it to the good mechanic (the one I should have taken it to first), who took only a few minutes to tell me (at no charge) that I had a burned out valve, and that replacing it would cost eight or nine hundred dollars.

My car is a 1991 Toyota Corolla, with 175,000 miles on the odometer, peeling paint on the exterior, a broken key stuck in one of the doors, and bad shocks. Some of you may remember when I bought it, over eleven years ago, following its predecessor’s disturbing death by arson. I love this car. It’s taken me on two round trip cross-country journeys (one in 1997 and one in 1998) and another one-way crossing as well. It survived numerous break-ins in San Francisco, and took me to Fresno and back many weekends in 2001 and 2002, before Mark and I cohabited. We’ve been everywhere together, and it’s given me almost no trouble at all, aside from a big scare which turned out to be a minor thing in central Texas in 2005. I thought it was indesctructable. But it’s not. And I can’t justify spending so much money (probably more than its current book value) on this repair.

Which means that my Corolla is about to go to car heaven. Its tags and insurance (conveniently coming due on the next month or so) will not be renewed. I’m going to run out its last tank of gas (I filled up the day before the calamity) driving back and forth to work, since I’m comfortable walking home from there should it die on the road. And then, I’ll either scrap it or donate its carcass to a worthy cause and take a tax deduction.

I drive my cars until they die. I’m glad this one didn’t die a slow, lingering death like my Firebird and my Duster, nor a violent death like my Scamp, my Tempo, and my Cavalier. I’d like to go that way myself when my time comes.

I’m really going to miss this car. I’ll probably never have another one that will compare.