Skip to content
David My Other Sites, Reminiscence and Reflection 8 April 2008 2 Minutes 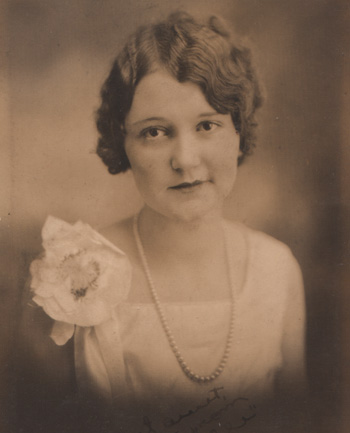 Today would have been my grandmother’s 100th birthday.

The photo above is from about 1926, before she married my grandfather and gave birth to my mom and three aunts. I can’t help but think that photo pretty much defined my grandmother’s perception of herself for her whole life; she had a lot of that Scarlett O’Hara “belle of the ball” thing going on.

Grandmother (she did not liked to be called “Grandma” or, heaven forbid, “Granny”) was a generally very pleasant lady, and one people liked, despite her numerous quirks. She loved her children and grandchildren and was willing to fight for them and do what needed to be done, although to call her “selfless” would be a bit of a stretch. She sometimes tended toward passive aggression, and I’ve always wondered if she weren’t much better suited to the role of grandmother than to that of mother.

Other quirks included her propensity for painting upholstered furniture (and I mean the upholstery itself, not the wood trim), gluing lamps and other things to tables so they wouldn’t move, and asking her 12-year-old grandson change light switches without turning the breaker off. She was definitely a character, and not your typical sweet little old lady. 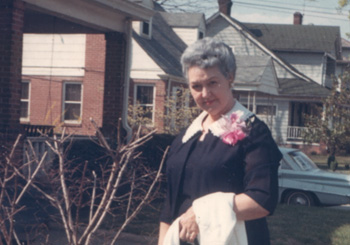 She led a colorful life, marrying three times and divorcing twice, at a time when doing so was unheard of in the south. During the Depression, she worked in cotton mills and ran cafés that were probably better described as roadhouses (while living upstairs). She travelled quite a lot over the course of her life, crossing the country at least once, and the ocean more than once.

Until her death, she rented “light housekeeping rooms” in her house to single men who otherwse might have lived in fleabag hotels, a practice fairly common among a generation of widows in the south, but one she also practiced while married and raising her four daughters. Into the 1990s, her front door was never locked, so that her “roomers” could come and go as needed. She ran the place with something of an iron hand (no alcohol, no male or female visitors upstairs, etc.) and without fear, although her daughters were sometimes nervous about the arrangement as she got older. 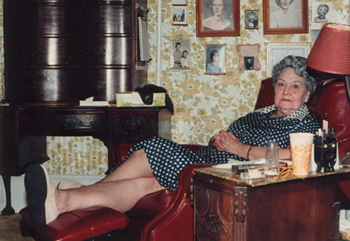 Her three-story house was enormous: 4084 square feet of heated area, says the county, and I’m guessing that doesn’t include the top level. I spent a lot of time there as a child, interacting with the roomers, placing newspaper ads for her and screening callers on the phone. I rummaged through her attic, and spent nights on her sleeper sofa. She loved “Sanford and Son” and “The Gong Show” and hated soap operas. Later, when I was in college and still living at home, I’d sometimes housesit for her, offering me much-needed independence and a place for doing things with other boys that Grandmother probably wouldn’t have approved of.

Independent as she may have seemed, she never learned to drive, a bit of “helplessness” she often used to her advantage when she was in her passive aggressive moods. 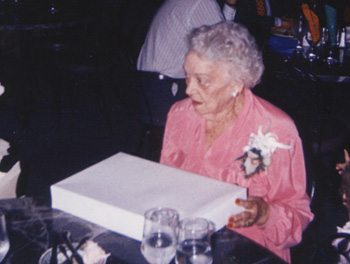 Grandmother died in 1991, a few days after her 83rd birthday.