A lot of you probably know that I worked for Kinko’s for the better part of sixteen years, which works out to well over a third of my life and way more than half of my adult life. Interestingly, yesterday’s announcement that the Kinko’s name would be retired after almost forty years came on the third anniversary of my last day with the company. 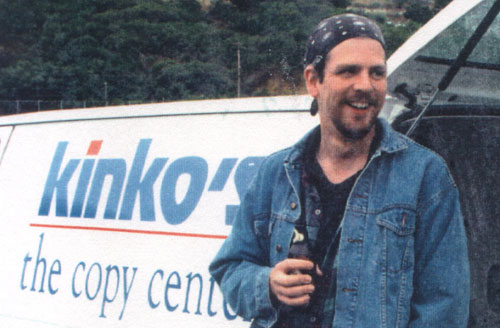 I was around for a lot of latter-day Kinko’s history, from the lawsuit that more or less ended its run as a producer of copyright-questionable course materials, to the FedEx acquisition in 2004. I started out as a part-time store “co-worker” in Greensboro and ended as a back office “team member” in San Francisco. In between, I took on numerous titles, part-time and full-time, some of them management-related, some of them training-related, and many of them just plain tedious. By the end, I was no longer waiting on customers nor making copies, but handling payroll, purchasing, random training, visual merchandising, and operations audits. It was never job I liked, but it was occasionally one I didn’t hate, and I met a lot of really great people there over the years.

The past five years or so have not been kind to my former employer. The global move away from paper-based document distribution aside, Kinko’s was largely resposible for its own undoing: the company seemed to have no clue which customers it wanted to attract (large companies? small businesses? church ladies reproducing the Sunday bulletin?) and also lost sight of how to treat its own employees. The “Kinko’s experience” became a pretty unpleasant one, and one that most customers probably would prefer to have avoided. And I imagine many did.

Right after the FedEx acquisition and the unveilinng of the new FedEx Kinko’s logo, we all speculated that the Kinko’s portion seemed something of an afterthought and would be easy to dispose of when the time came. Yesterday, the time came. I’m not sure that trashing four decades of brand equity is a wise move (no matter how the brand may have fallen) and I’m not convinced that the new name, FedEx Office, is much of an improvement. But I don’t work there anymore, so I really don’t have to care. It’s still a little sad, though. That name was a part of my life for a long time, for better or worse.