Picture it. Greensboro NC. Sometime in the vicinity of 1992.

Yer humble host was a long-haired homo misfit in a place that was having none of it. He had a few friends scattered between there and Charlotte to the south, and he relied on their tolerance to make life liveable. Generally, though, he hated everyone else he came in contact with, particularly his fellow homos, most of whom were just as happy as could be dancing around in their acid-washed jeans in the city’s collection of generic queer bars, immersed in the same bland “not quite disco, not quite house, not quite techno” musical sludge southern queer bars have relying on seemingly since the dawn of time.

So I visited my friend Jeff T., a co-worker and a recently uncloseted deadhead turned rave child, one night before drining heavily, as was my custom at the time. I met his new squeeze that night. He seemed a rather nice sort, and I had the vague feeling I’d met him once before, many years in the past, but that we hadn’t really gotten to know each other. 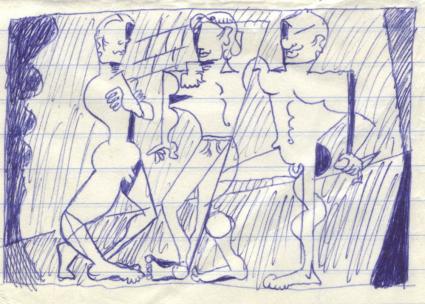 This tme around, we actually did get to know each other, and Mark turned out to be one of the only people I manged not only to tolerate, but actually even to like during my last few months in Greensboro. He evetually broke up with Jeff (who later developed a rather unhealthy obsession with another of my friends) and Mark and I got to spend time lurking around dark bars, movie theatres, and the occasional Denny’s. I was sort of obsessed with Denny’s at the time. And then there was the famed 1992 Color Copy Tour of South Carolina, which I may dicsuss some day. This is not that day. 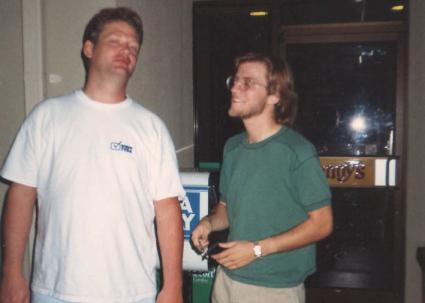 He was on an extended trip to Los Angeles when I moved to San Francisco in October 1992, but had returned to Greensboro by my first visit home the following year, which is when this picture was taken:

Actually, I think it was the Denny’s in Greensboro.

That was probably the last time we saw each other face to face. As often happens when people are preoccupied with life, the letters and calls just sort of stopped. And we both had fairly eventful lives from that point on, in San Francisco for me and in New York for Mark, as it turns out. I often wondered where he’d ended up and what had happened to him, and if he still hated pickles and flossed regularly and wrote really well.

Guess what. He does.

And after all this time, damned if we didn’t land about 2 1/2 hours from each other, back in North Carolina, which must say something about our home state, even though I’m not sure just what it is.

Now that we’ve run across each other again after fifteen years, I’m ready to admit that I’ve still never seen Heathers and still don’t quite get that reference in that letter from 1993. I’ll have to rectify that situation.