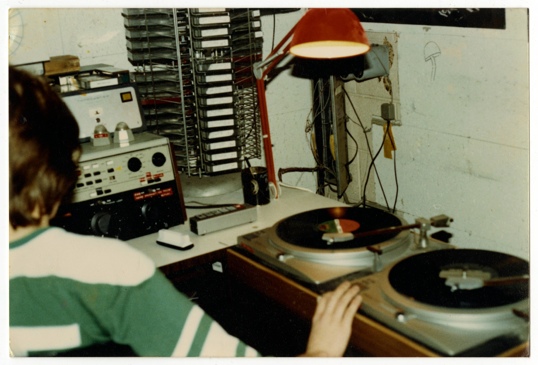 The stupid baseball game ran almost two hours late, delaying my debut until after 1AM. Finally, though, I started out with “While My Guitar Gently Weeps” by the Beatles. It seems a slightly odd choice now but was pretty appropriate for me at the time. Later, there were the Clash, the B-52s, and Laurie Anderson. And I realized that one month shy of legal age I’d finally found a musical instrument I knew how to play: the turntable.

It was a good move. Through that whole experience, I met some of my closest lifelong friends. In a year of many beginnings–high school graduation, “coming out”, my first actual date with a man, and the start of college among others–it’s amazing that i still find this to be perhaps the real defining moment when i went from being a teenager to a prospective adult. Not bad for an unpaid gig in the middle of he night, eh?

I pondered some sort of celebratory project to mark the anniversary but this is the best I could do. And the picture above wasn’t taken the day of, but it’s a reasonable facsimile of what the whole affair might have looked like.

More WUAG memorabilia for those who care (work in progress).