I once had an attention span. Now I just publish bullet lists:

As for me, I finally finished the first draft of my reappointment portfolio last week. After one last proofing tomorrow, I’ll submit it on Monday and then will have a free week or two before I have to do anything else to it. Now that I’m done with what has pretty much been two solid months of composing very dry prose (between that and another pair of projects), I’ll be able to contribute something here again. Or at least have some weekend time to take care of some pressing projects at home. We’ll see.

On this, my first actual weekend in quite a few weeks, I’m moving data from the dead G5 to one of the many external drives that populate the basement, particularly after the ex sent me a few extra ones several weeks back. Most of this is not really irreplaceable stuff, but it is stuff that would require a lot of work to replace, so I’m glad I’ve got a couple of cheap HDD enclosures handy so I can grab it all without too much trouble.

I’ll probably be investing in one of the new 27-inch iMacs when they ship in a couple of weeks. Having used an early 2005 G5 for six years followed by another year and a half on a late 2005 iMac, I think it’s really time for an upgrade. It’s also amazing how well Apple hardware lasts (I was still editing video on the G5 till the bitter end) but that’s a subject for a different day.

Getting all this stuff off the G5 will also allow me to proceed with the home video project, which has been sort of stuck in neutral for a few months.

But at least the McRib is back. Too bad I’m not supposed to eat one. I may cheat.

Fifty pounds of paintings shipped to my former in-laws: Done.

First of many loads taken to Goodwill: Done.

Telling my dad to please stop calling me because I’m already in a lousy enough frame of mind myself tonight and can’t really handle being his support system too right now: Not done.

I regularly watch 1970s cop shows filmed on location (usually in LA or sometimes San Francisco) with iPad in hand, looking for current views of the locations on Google Street View. I know. I’m a big geek who has no life. We’ve already established that fact.

Sometimes, though, the geography on these shows is out of whack that it makes me laugh out loud. Even worse than a Streets of San Francisco where they make up streets that don’t really exist (e.g. Embarcadero Center being located on something called “Saint Andrews Road”) is the way some shows have used real street names with no regard to their actual locations. Tonight I caught a scene from Adam-12 that was allegedly taking place on Ventura, between Olympic and Washington, west of Melrose. I challenge anyone who’s familiar with LA to locate that particular bit of real estate on a map. It’s kind of like saying Detroit is on the Georgia side of Massachusetts, near Phoenix.

I realize that this probably amuses me more than you. I do not care.

Good news at work yesterday suggests that I will actually be able to take a vacation during my holiday vacation and not have to spend it working on my reappointment paperwork. I’m still thinking of the whole “relaxing vacation” thing as a change of pace, but I’m open to other suggestions too. What I really want for Christmas, though, is not to have Christmas at all. Yeah, I was serious about that. It would be great to leave work on Friday the 21st, flee Greensboro that afternoon, and not return until the new year, avoiding all the family stuff and everything else. I probably won’t be able to get away with that, though.

I’m glad to have finally found this video. I was really quite obsessed with this song when I was in Ottawa and Gatineau last year and when I got home. I guess it was just one of those songs that hit me the right way at that particular place and time. And it still does. Maybe I got hooked in by the fact that it’s about being twenty years old in 1984–which is rather a familiar theme for me. Anyway, once I finally figured out who and what it was (Shazam not being terribly effective with francophone pop) I actually bought the whole album and it was quite wonderful.

I guess this was the start of my fascination with Quebecois rock and Canadian alt-rock and alt-pop in general, which actually got me really exited about new music again for the first time in quite a while.

…and a reminder of why I still have my own website, in case I’d forgotten (via Ed Cone):

We get excuses about why we can’t search for old tweets or our own relevant Facebook content, though we got more comprehensive results from a Technorati search that was cobbled together on the feeble software platforms of its era. We get bullshit turf battles like Tumblr not being able to find your Twitter friends or Facebook not letting Instagram photos show up on Twitter because of giant companies pursuing their agendas instead of collaborating in a way that would serve users. I left the house at about 9AM yesterday, headed for Target to pick up a prescription. When I got home twelve hours later, I’d been to Charlotte for lunch, a movie, and dinner at the soon-to-be-defunct Riverview Inn. I do things like that sometimes; Saturdays are more fun when you surprise yourself.

I know I have a tendency to overanalyze my relationships with cities but it’s generally easier and more satisfying than trying to figure out my relationships with other people. Charlotte’s metaphor in this scheme is, I suppose, that of the old friend who sometimes gets on your nerves and with whom you enjoy hanging out but probably wouldn’t want to spend all your time. I don’t have any particular desire ever to live there again–I’ve already tried it twice. I  find Charlotte rather a bland and soulless place, the epitome of a  Sun Belt boomtown, but it still feels comfortable and in many ways feels more like home than Winston-Salem ever really has. Even though I’ve lived here much longer than I ever lived in Charlotte (six and a half years…damn…), I’m always a little surprised to realize that I can still find my way around the back roads of Charlotte better and that everything about it is more familiar than my current city.

It may be because my history with Charlotte is centered around a more period in my life when I was younger and more adventurous and everything was newer and more exciting. Charlotte was the first place I ever lived on my own. There is definitely nostalgia involved. I don’t have a lot of youthful memories of Winston-Salem, though, so I associate it with being older and more settled. That has its own benefits but is not really all that high on the excitement scale.

It also may be due to the fact that most of my life really takes place in Greensboro now anyway. Winston-Salem is where I sleep and buy groceries, and that’s about it.

That’s not to say I don’t like it here. Winston-Salem is fine, really, and it works for me in several ways right now. My neighborhood is convenient (albeit not to work), I like my house (even though it’s way too big), and there are lots of good restaurants here. But I don’t have a big emotional relationship with the Twin City and I don’t imagine I’ll live out the rest of my my days or even the rest of the decade here.

I don’t imagine I’ll ever live in Charlotte again either. My second residence during 2005 and 2006 made me realize that whatever I’d liked about living there in my twenties didn’t translate well to my forties. We seem to get along better from a distance.

…and it will all mercifully be over. But it’s gonna be a long forty-eight hours.

This year, I skipped the whole gift shopping nightmare but there’s no escaping the assorted family pressure. Next year, I’m leaving town for the whole week and I don’t really give a damn how it goes over with anyone.

That said, I have gotten a lot done around the house this weekend and I’m otherwise In a pretty pleasant frame of mind. I’m just really not feeling Christmas this year. Aggressively, even… 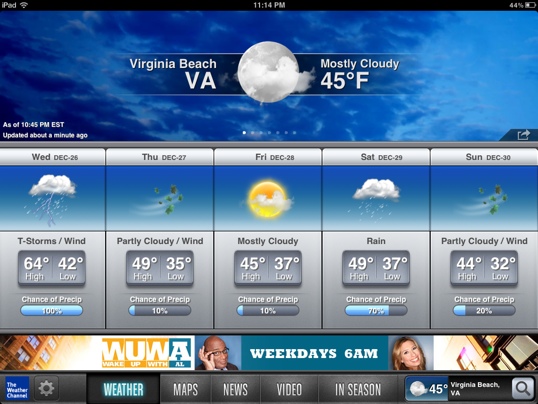 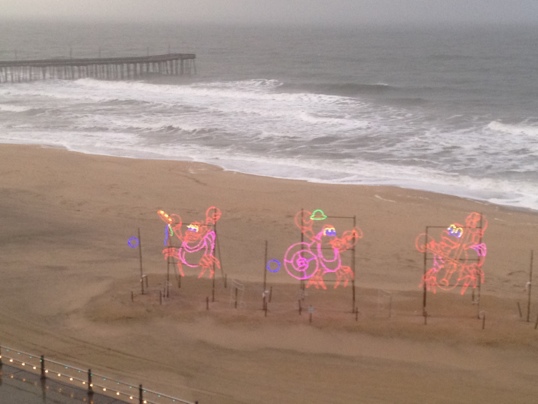 …the beach in winter when it’s cold and rainy and deserted. And when I can get an oceanfront room with a balcony for less than I’d pay at the average suburban Red Roof Inn. Decorations optional.

I landed on Virginia Beach because I wanted that whole relaxing beach thing but also wanted a city nearby in case I got bored. Got my books, got my provisions from Kroger, and got my favorite traveling companion (that would be me) along for the ride. See you in a few days, if not before.

Random post-pizza thoughts on a freezing cold night at the beach: 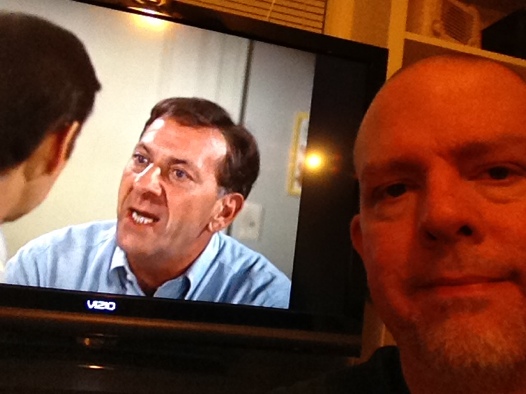 They say the person you spend New Year’s Eve with will be your companion for the following year. If that’s the case, Jack Klugman and I will be together a lot next year. For reference, that doesn’t mean that I’m planning to “go to my reward” but just that I watched a few episodes of The Odd Couple tonight before retiring to the basement to play with my databases.

I’m not really going to reflect on 2012 other than to say that it sucked less than 2011 did and hopefully sucked more than 2013 will. That’s all any of us can really ask for, right?