I was working on a really long and repetitive metadata project so I was pretty much under the headphones listening to music all day. It would be an understatement to say that the iTunes shuffle was very 1984-centric. I mean unrelentingly 1984, including obscure stuff that never seems to pop up otherwise. It’s like there was some sort of conspiracy to make sure I left work completely and thoroughly depressed…and no matter how often I re-shuffled, it just kept coming and coming. Right now, I’m getting “Cold Kid” by Glass Moon, which came immediately on the heels of “One Small Day” by Ultravox. Seriously. All day long it’s been music from the year that was–until 2011, at least–the gold standard of miserable, depressing years for me. I should be ready to stick my head in the oven by now.

But I’m not. Which is rather a nice feeling.

That said, I don’t think I’ll be opting for First Wave on the way home tonight. Not that I ever do anyway. Interestingly enough, I can barely stand to listen to early 1980s alt-pop these days…unless it’s in French. I had a conversation about this with a friend (one with whom I spent much of the 1980s) the other night. In retrospect, the 1990s were much more suited to my personality than the 1980s were and I liked them much better; the music was better, the boys were cuter, and I got laid a lot more. Further, I’m actually sort of off the whole “living in the past musically” thing of late anyway. Unless it’s the really long past…like before I was born…

Anyway, I’m off to DC next weekend. If anyone else will be there as well, I’m up for dinner at my new favorite Lebanese place in Alexandria. Or at the Roy Rogers of your choice.

With that, I’ll say “Happy Canada Day’ and be on my way home. 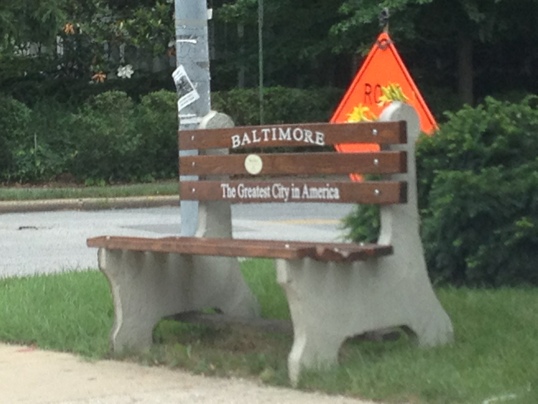 The claim on the bench may be a bit of a stretch but I really do love Baltimore. Like Pittsburgh, it’s not an easy place to understand. That may be why I like it do much–that and the fact that it’s so damned photogenic (photos to follow).

Exploring DC tomorrow. I will try to avoid the bookstore at the National Building Museum. It will not be easy.

Stuff for a Wednesday night spent recuperating from a long-delayed root canal:

I was reminded of this by a friend’s Facebook posting today. A damp time was had by all, and I don’t mean “damp” in the sense that was often used at other South of Market venues of the era.

It’s not the definitive version–that honor would fall to Steve Lawrence or Peggy Lee–but it is most definitely the most surreal version. I love my job…

I just mapped out an incredible (and incredibly expensive) potential plan for my annual October roadtrip/Canadian holiday. It makes me all tingly with anticipation. Will I actually do it? It sure wold be nice to feel consistently tingly for a change. Details to follow. Maybe…

The part of me that has a 10AM breakfast date with some friends in Winston-Salem wishes that other part of me hadn’t kept me out so fucking late last night.

One of those songs I recently heard for the first time in several years, and I was reminded of how much I liked it…