…was in October of 1992. It was the first stop on my first cross-country road trip when I was moving to San Francisco. As I recall, I was there on a Monday night. I stayed at the Motel 6, went to a couple of bars, and left the next morning. I remember almost nothing about the place, except that the queer bar was as boring as every other Southern queer bar, and the alt-rock place downtown was completely empty on a Monday night. And I think I was in some neighborhood near Vanderbilt that had old houses and a Kinko’s.

Anyway, I’ll be there again this week doing a conference presentation. Suggestions that don’t involve boring queer bars or Kinko’s are welcome.

A few updates before bed:

The approved librarian term for weeding collections is “deaccessioning.” Contrary to popular belief, we don’t hold on to every item we have until the end of time. We have to get rid of things periodically, and this is usually done through some set of criteria based on how useful the items remain over time. Sentiment can factor in to the process, but shouldn’t really be the primary factor.

I’m moving right now. Actually, I’ve already pretty much moved, but I’m consolidating the two houses (and a few leftovers from the one in Pittsburgh as well) and getting rid of a lot of stuff in the process. There are a few specific items that have some sentimental value for me and I’m having to consider whether they have enough value to justify keeping them. This is a process I wish my mom had gone through at some point in her past as well, but in a sprawling, suburban place like the American Sunbelt, it just doesn’t happen–at least not for settled residents who own their own homes that they can fill with limitless collections and accumulations of crap.

In fact, the ability to hold on to things like this was something that attracted me back to the whole detached single-family home model nine years ago. I like hanging on to things. It was also apparently attractive to my ex, since a not insignificant proportion of the stuff I’ve been “deaccessioning” was originally his. When you think you have unlimited space, it’s easy to avoid making decisions about what stays and what goes.

Until some event like a divorce, or a death, or a “geographical realignment” forces that decision, that is…

For me, the consolidation of the houses is the current incarnation of that event, and I’m using it an opportunity to get rid of tons of things I really have no use for. When a letter or a photo or a small toy has some special meaning or memory attached to it, it’s not unreasonable to hang on to it. But what if the thing that has sentimental value is a bedroom suite that–apart from the memories–you don’t really need or like that much? Or maybe a box of items that you otherwise wouldn’t have any real use for? is there really any reason to hold on to things like that when they actually start causing you stress rather than giving you pleasure? How important are things that you keep in a box in the basement and never look at except when you move or need to “rearrange” them to make room for more stuff?

I have several large pieces of furniture like this, many of which I have offered to sell or give away to Facebook friends. Some of these friends have suggested that i really “should” hold onto items because they were my grandmother’s or because they pertain to my childhood or whatever. But these are big, bulky things that take up space and that I would never acquire on my own given the opportunity to do so. Why should I keep lugging them from place to place and stepping around them when I really have no good use for them? It’s not like I’m going to forget my grandmother if I sell this bedroom suite that’s too big and not my style. And why do I need boxes of newspapers that I’ll never read and whose content is really of no interest to me just because they remind me of a specific trip I took in 2008 or because I think that I’ll eventually forget what newspapers look like if I don’t keep them?

I won’t even get started on the pressure I’ve gotten from some of my cousins to hang on to my dad’s guns. It’s great that he loved them. i don’t. They make me nervous and I don’t want them in my house. Case closed. And the funny thing is that these cousins are strangely hesitant when I offer to give them the whole fucking arsenal.

So I’m being pretty ruthless. I’m only hanging on to furniture that (a) I really like or (b) serves some useful purpose in my life. And I’m not feeling bad about deaccessioning items that match neither criterion. I’m selling what I can get rid of with minimal effort (I can’t be bothered with yard sales or Craigslist) and calling Habitat or the junk man to get rid of the rest. The funny thing is that once I made the decision, the process got so much easier! I think it helps that I was a city kid who lived in cramped urban quarters for many years; interestingly, I buy groceries like a city kid too, with multiple small trips rather than big weekend excursions.

I’m learning to do the same thing with people.

Over the past few years, I’ve reconnected with lots of old friends, some of them people I haven’t talked to in twenty years or more. I’m incredibly excited to be back in touch with a lot of these people. I’ve missed them and we were able to resume our friendships with ease. With others, I have–how shall I say this?–quickly realized that there was a reason why we’d lost touch.

In some cases, it’s because they became batshit crazy lunatics or never grew out of the “drugs, drama, and divahood (divadom?)” of their twenties. With these, I pretty much manage to lose touch again as quickly as possible because I have anough bullshit in my own life without taking on the additional bullshit of someone else who adds nothing positive to my life in the process. I have a few interesting Facebook anecdotes I can share if you want illustrations.

With others, I find that they have just moved off in a different direction and I’ve discovered that we really don’t have much to talk about anymore. Reminiscing about drinking in bars in 1989 is only interesting for so long if you have nothing new to add to the conversation. Usually, I think they realize it too and we just sort of back off again, realizing that our “friendship” will be the modern equivalent of running into each other downtown every few years, having a five-minute “catch up” on the street corner and then moving on. I have no animosity, but there’s no need to expend effort cultivating a relationship that clearly offers no real benefit to either party.

Like my house, my life is cluttered enough without feeling the need to maintain relationships that really don’t make me happy anymore. And I have way too many stressful relationships that I can’t ignore for one reason or another to hang onto additional ones that can be avoided, especially if we’re just friends because of fifteen or twenty years of inertia or a shared experience that ended years ago and was never replaced by anything new.

Now if I could just get a little better at letting go of grudges. And pictures. And cans of green beans…

Three bands with 1990s origins that I love even more now than I did then:

One band with 1990s origins that I hate just as much now as I did then: OK, so I wasn’t exactly channeling Porter Wagoner. But I was just a couple blocks from where the Opry used to live… Sometimes you have to take a day or two off just to catch up with your life.

Today was that day for me. I knocked out a huge pile of things that have been hanging over my head, related to the sale of the house and to my mom. I no longer feel like everything is so out of control. And I’m thinking I may actually take a day off this weekend (and not use it to write an article like I did last weekend).

That said, the disposition of the house has been delayed, maybe for several weeks, due to a storm this week that forced the contractor to push back the oil tank removal. No comment yet from the buyers, but I think they’re pretty invested at this point and they apparently love the house, so I’m thinking things will be OK. 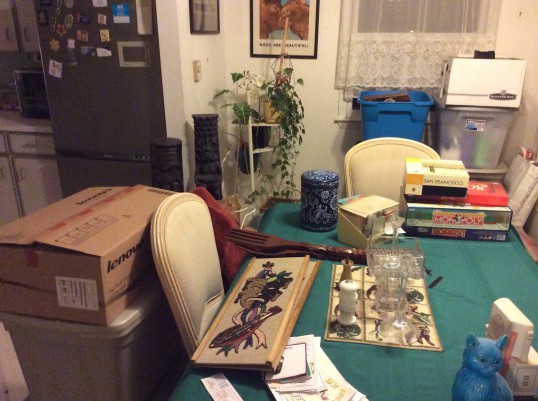 Got rid of a car today, and a shitload of stuff leaves tomorrow to help Habitat (or to line the pocket of the junkman). Just for reference, you can sell a car without a properly notarized title transfer in North Carolina as long as it’s for salvage and the car is more than ten years old. You apparently cannot, however, donate it or sell it to someone who may actually want to register it. As I’m all about making things as simple as possible these days, I opted for the $175 path of least resistance. The extra cash will cover one or two per cent of the oil tank removal cost.

Also for the record, no one (charity shops included) wants big, useless entertainment centers or particle-board computer desks. And Greensboro is much more advanced in its waste management program than Winston-Salem. By “advanced”, I mean that recycling is easier and everything else is generally less of a pain in the ass in Greensboro. Unfortunately, most of the stuff I need to get rid of is in Winston-Salem.

Getting rid of stuff makes me strangely happy. So I should be ecstatic tomorrow night. Maybe I’ll even splurge and do this. I saw them a couple of years ago and they do put on quite the show.

And what really disturbs me here is that I just typed “more than these things usually do” as if random gun violence were a pretty regular and otherwise unremarkable thing. Which, of course, it is here in America, where every crackpot gun nut in the trailer park (or on the golf course) believes himself to be a one-man “well-regulated militia.”

There’s no way in hell you can convince me that we’re going to solve this problem by arming even more people. And the next person who tries to compare this to the shootings in Charleston may get smacked for being an idiot with whom I no longer feel the need to be patient or tolerant. I finally submitted that article, approximately seven hours before it was due.

I’m going to go have leftovers from last night’s delicious meal with no name now.