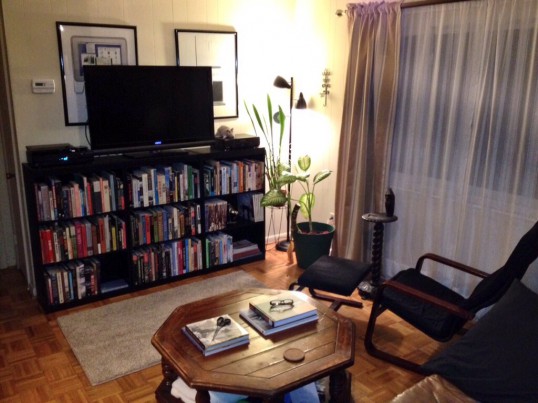 Being optimistic that I may actually close on the house I’m selling this week, I finally moved everything out on Thursday. There are a couple of boxes of odds and ends, and a couple of things for the junkman to pick up — things that Goodwill and Habitat would not take — but generally, it’s pretty much empty. If there were any chance of this turning into something emotional, they were basically negated by all the stress that’s been involved with the repairs and the oil tank.

Since I’ve pretty much been living in my “new” house for two years, I think I underestimated (or was in denial about) how much stuff was still in the “old” one. I’m a little overwhelmed by the influx of stuff. It’s mostly a storage issue, and when I get all my shelving set up I should be fine. There’s also an issue of excessive furniture, but I’m working on that with the consignment shop and with Habitat for Humanity.

So I spent today getting the place habitable. I can’t live with chaos for any length of time and even if I really need to be doing something else, minimizing the chaos is always going to be the first priority. I have to have one living space that’s completely normal, and I have to be able to at least walk through every room. I did manage to get to that point by this afternoon.

And then I made the mistake of driving over to Winston to pick up a few odds and ends. Shouldn’t have done that. I tripped on the curb while carrying a box, and did awful things to my knee. I’ll spare you the picture, but I have a feeling it’s really going to hurt tomorrow. The most fun part of the whole thing was that I didn’t even have anything to dress the wound with, since I’ve already cleared out the house. I had to run to Target with my bloody knee fully exposed and…um…bleeding. That was attractive.

It’ll all be over soon, right?