Just an excuse to post a pretty picture I took when I was over there for a conference earlier this week. The colors are nicer when you look at it full-size.

It’s been over five years since I really lived there, and more than three since I sold the house. Time flies when you’re — um — old. 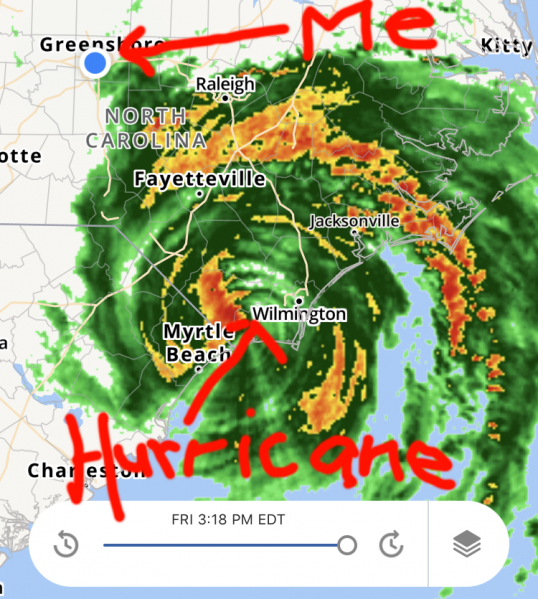 Love that April snow. Maybe I was premature in my depression a while back. Seems the weather will be staying nice for a bit longer.

The long hell of spring and summer is coming. Sigh.

I always get a little depressed this time of year (usually in March, but sometimes in February when we have a warm spell like this) because I know the summer season will arrive soon, with all its sunshine and pollen, its stinky cut grass and humidity, and its general unpleasantness. I think it goes back to when I was a kid and started dreading the time of year when I would be expected to play outside on occasion. I don’t like playing outside, especially in the summer when it’s miserably uncomfortable.

Interestingly enough, I do like walking around extensively amid the built environment (i.e. in big cities) in the fall and winter. That’s pretty much the only time I like to be outside. Otherwise, that whole winter hibernation mode thing works just fine for me.

Oh well. Set the AC on sub-arctic. The bad weather months have arrived.

I’m of several minds about the controversial New York Times piece on the friendly neighborhood racist prick. I recognize that the article did go a long way toward “normalizing” his behavior, though I think it stopped short of being an apologia. That said, I also believe that there is some validity in demonstrating that racist nutjobs can be your neighbors and can seem like “nice people” until you learn what they really stand for. And I think there is a significant part of the population that doesn’t realize this.

I’ve written about Oleene before. She lived right across the street from me and seemed to many people to be a very nice lady, a good Christian, and the kind of person you’d want watching your kids during the day. But as one of the kids she watched, I realized that she was not a nice lady at all. She was horrible. She said things about people of color that make my skin crawl to this day; these were awful, hateful, and — in retrospect — violent things. She was a despicable human being and, despite having known her since childhood, I couldn’t make myself attend her funeral when she died. I used to try to excuse her, but by the time she died, I didn’t feel any sense of loss at all.

But yeah, she seemed like a sweet little Christian lady until she started talking about anyone who was different from her. And ultimately, it wasn’t just people of different races or ethnicities. Not surprisingly, I never quite fit the mold of what she thought a boy should be interested in. I wanted to read and draw and use my imagination and learn things. She constantly pushed me to go outside, pick up a ball, and act like the other boys and stop being so “silly.” She minimized and ridiculed everything that mattered to me. She made me think there was something wrong with me, and I grew to hate her for it. As I’ve also said before, Oleene and the “moral” evangelical hypocrites at Vandalia Christian School are two of the main factors in my transformation from Bible-toting child to atheist adult. Suffice to say, none of these folks provided me with a model that was in any way “Christlike” nor something I could imagine dedicating my life to.

The point here, though, is that she just seemed to blend in with the neighborhood, and I don’t think anyone ever really exposed her or called her on her bullshit (except maybe me, when I hit my rebellious years). She was an evil, hateful person who wrapped her nastiness in a cute wrapper of Christian belief and Southern sweetness. And she’s not alone. In fact, there are a lot of her around. And they, like Tony Hovater, need to be exposed. The Times may not have done so in the best way possible. Someone should.

I went to the fair for the first time since 2010. We saw the giant pumpkins and the pigs and the assorted cakes that were already past their prime and starting to look a little worse for the wear. We marveled at the “most effective use of a gourd” winner. Many of the youngsters’ art projects had a very encouraging urban feel to them. I made wry comments as we walked past the Republican party booth and the “right to life” booth (which was, of course, staffed only by men) and I had Methodist hot dogs and cobbler. I somehow too no pictures. My “date” won a ribbon for a dress she made. It was nice.

Canada Saturday for the annual Thanksgiving trip. There may or may not be updates from the road here and/or on the various Twitter accounts.