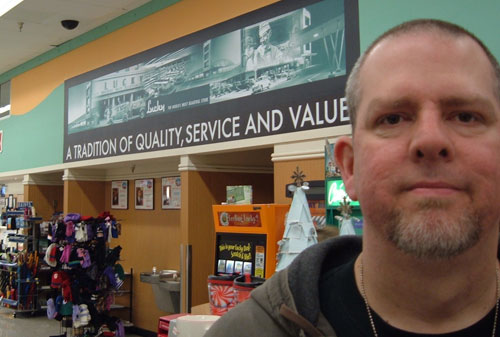 I’m a curmudgeonly sort, born and raised in North Carolina, seasoned and somewhat traumatized by thirteen long years in San Francisco and one scary summer in South Carolina.  I spent most of the 1990s watching the internet be born down the street from me in San Francisco and assisting with the rearing of this new technochild. It was a rather entertaining cloud of nicotine, booze, road trips, and random sex (some of which is documented on this very site). I spent the rest of my time working at Kinko’s, listening to noisy rock and roll, and trying to avoid “gay culture”, whatever the hell that is.

I was coupled from 2001 through 2011. I no longer am. I still take road trips but I don’t smoke anymore and I’ve given up on most decadence that doesn’t involve food. I write about old supermarkets and update my databases instead. I escaped from San Francisco in 2005, got my master’s in 2009, and I’m now living back in my home state and working as a digital librarian at a large university. If this means I’ve become a boring, I’m pretty much okay with that.

Selected Details from the Otherstream Archives: