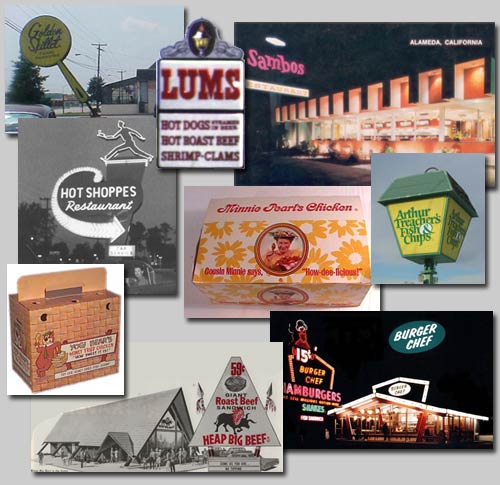 And now, here are some of the strange (and mostly vanished) restaurant chains of my youth:

This was either a regional or a national franchise, but was one of many which appeared and disappeared very quickly in the late 1960s and early 1970s. There was a location in Greensboro, next to the Big Bear supermarket on High Point Road. I remember a rumor that Honey’s, a regional chain of coffee shops tried to sue them for trademark infringement for using the term “honey fried chicken”. There’s one remaining location on US 15 Business near downtown Hartsville SC.

This was a fairly famous franchise of the late 1960s/early 1970s, not for the chicken but for reputedly fraudulent practices by the franchiser. I don’t remember a lot about the chain except that its Greensboro location was on Battleground Avenue near Cone Boulevard. Last time I looked, the building was still there. There’s also a similar building in Charlotte near Cotswold Shopping Center that I have my suspicions about. This franchise went under during the great shakedown of 1972 and almost took Minnie Pearl’s good name with it.

These were fairly common in North Carolina and Virginia in the 1970s, and I’ve heard that several remain scattered around Virginia. The buildings featured a rather distinctive yellow roof with sort of a ziggurat shape. The sign was a big yellow frying pan resting on its handle. I remember Greensboro locations on High Point Road at Florida Street (later Cheap Joe’s Jeans and now Jake’s Diner), Randleman Road, and inside the Thalhimer’s department store at Friendly Shopping Center. There may have been others in Greensboro; I don’t remember.

Part of the late 1960s wave that brought us Long John Silver’s and H. Salt. They were pretty big at one point judging from the number of their former lamp-shaped signs still standing in cities from Charlotte to Fresno. Most Americans probably had no clue who Arthur Treacher was, which may explain why the chain ultimately didn’t do so well, but it DOES still exist. I remember the Greensboro location on Summit Avenue near Bessemer; there may have been one near the Kmart on Randleman Road too.

Interesting story here. I don’t really remember this specific chain from my childhood, only its building on High Point Road at Ellington Street in Greensboro. After Heap Big Beef, it was briefly a pancake house and then it became Ghassan’s, a local Lebanese deli/sub shop which remains in the same building to this day.

I was always curious about the building even as a child, and I vaguely remembered some previous unnamed tenant, but no one could confirm what it had been. I suspected a failed chain and my suspicions were confirmed when I finally found an identical building housing a tacqueria in Millbrae CA. A little research eventually revealed that both had been part of Heap Big Beef, the chain with the name too offensive to succeed.

Speaking of offensive, this one maybe isn’t quite as much so as it seemed. First, it was named after its founders, Sam and Bo, rather than after the famed character from the book. While the chain adopted a cartoon character fashioned after Little Black Sambo, he was Indian rather than African, so as not to offend black patrons. The chain went under, with many units becoming Denny’s outlets. Only the original location in Santa Barbara remains. In Greensboro, Sambo’s was located off I-85 on Greenhaven Drive, by what is now a Motel 6.

Once a large regional chain, Biff Burger pretty much disintegrated in the 1970s. Greensboro’s location on West Lee Street is still there, although the owner renamed it Beef Burger at some point since he was worried that someone might gain control of the name that the initial franchisers had abandoned and sue him for using it. There’s apparently still a location somewhere around Daytona Beach as well, and there’s a tribute website about the chain.

Home of hot dogs cooked in beer and the famous Ollieburger, Lum’s was a TGI Friday’s precursor, with sort of a Gay 90’s vibe. There’s apparently one left in Plattsburgh, New York and there may also be one in Delaware. Greensboro’s was on Battleground Avenue near Cornwallis Drive.

Burger Chef and Jeff were incrediburgable. There’s a website devoted to this much-loved chain, so I’ll limit my comments to mentioning the Greensboro locations. There were at least three: Lee Street at Aycock (now a Mexican restaurant), Cornwallis Drive across from the Golden Gate Shopping Center (now another branch of Ghassan’s, see Heap Big Beef above), and an unusual storefront location on South Elm Street downtown (later The Elms restaurant and Fenders nightclub, among other things).

This one’s not really dead either, and I always stop in for a Double R Bar Burger when I find an open branch. I remember that their roast beef used to be quite rare compared to Arby’s. They also played up the cowboy theme a little too much, yelling “howdy pardner” to everyone who entered and directing them to the “fixin’s bar” for condiments. Roy Rogers was a part of Marriott before being sold to Hardee’s and almost dismantled. It was on High Point Road near Florida Street in Greensboro in a building which later housed a Mrs. Winner’s among other things. I also remember a really big location at Tyson’s Corner near Washington DC, which had a cafeteria-style service line, as do (I think) some of their turnpike service plaza locations today.

These went away when I was really young, but they were all over the south and many of their buildings remain. Waffle House literally owes its existance to the chain, founded as it was by a former Toddle House executive. They were very distinctive in that they were tiny little diners built to look like tiny little cottages, even though they were usually in decidedly urban locations. Unlike the later trend of using residential styling to help businesses “blend in” in the suburbs, Toddle House used residential imagery to make its units stand out. I specifically remember one on West Market Street downtown (by the now-demolished former YMCA building) and one on Summit Avenue near Bessemer. I think both of them later became something called the Steak and Egg Kitchen.

The Hot Shoppes restaurants around Washington DC were the beginning of the Marriott hotel empire. Their base was always in DC and northern Virginia, where they had drive-ins, sit-down restaurants, and even cafeterias (we always ate at the one in Tyson’s Corner Center). They expanded briefly into the south, however, and had a location in Greensboro at Summit and Wendover Avenues. It later became a Honey’s coffee shop and it’s now a Libby Hill Seafood branch.

Maybe some day I’ll talk aboust other chains from my past, including the well–documented Howard Johnsons and such regional favorites as Sir Pizza, Wishbone Chicken, and Honey’s. Today is not that day…

One thought on “Minnie and Yogi and Arthur and Roy”