We tried to have breakfast at two different Waffle Houses. The crowd scared us at the first, and the fact that no one would wait on us drove us away from the second. So we moved on to lunch at what is apparently one of the last remaining S&S Cafeterias. We had our Hoppin’ John and our collard greens and our assorted pork products, thus assuring a happy and prosperous New Year.

Finally it was time to walk around downtown. We limited ourselves to Meeting and King Streets, and the verdict was that either is much better north of Calhoun, which is where the hipster shopping mall zone ends, or south of Broad, where it becomes largely residential. All in all, the New Year’s Day crowds were much less infested with hipster clones, although a few could still be found roaming around in ugly shoes and brand new sweatsuit jackets which had been “aged” using godonlyknows what chemicals.

Downtown Charleston, like downtown Savannah, illustrates the history of a city which was initially one of the largest in the southeast, but which had become rather irrelevant by the 1920s. The extremely long, but low-rise main street indicates that Charleston’s day had come and gone long before that early twentieth century period that screams “urban” to most people today. Thus, it seems very small and quaint even though it was clearly once regarded as a very big city.

After covering the commercial strip, one very nice boneyard, a bit of residential, and the Battery, it was time to stop by the Harris-Teeter (simply because it was there) and drive home to Charlotte.

Happy New Year. Just returned from an unannounced few days in Charleston and Savannah, and I haven’t dealt with the email or anything else. And I’m not planning to until tomorrow. This is merely to let anyone cares know that I’m alive and well…

After three days, I now have an internet connection again. It’s a long story, but now that it’s back, I’ll try to actually answer email and post pictures from the trip and stuff. I know you’ve all been sitting on the edge of your chairs waiting for that, right?

Isn’t there someone out there who can make sure that Pat Roberston stays on his medication? Seriously. I’m worried that he may hurt himself one of these days, bless his heart…

The hubby and I spent yesterday afternoon in Winston-Salem. I’ve always liked it there, and I’d argue that it may well be the most attractive city in North Carolina. It has a denser urban feel than many similar or larger cities in the area, most likely because until the 1920s, it was the biggest city in the state.

As I’ve opined many times before, the size of any given city in the 1920s is perhaps the most accurate single predictor of how “urban” we perceive that city to be today. It seems the form and density of 1920s development is what defines urbanism to many of us, if only from an aesthetic perspective. A city can have earlier or later development too, but without a fairly high proportion of semi-dense early twentieth-century residential and commercial areas, it just seems quaint and precious like Charleston or a little sanitized and bland like Charlotte and Phoenix…

Winston-Salem is our own little slice of Pittsburgh, not just gritty and industrial at its heart, but also built on numerous hills and more than a little run-down. Yet there are still beautiful and stable inner-city areas which are amazingly inexpensive compared to their counterparts in Charlotte or Raleigh or even Greensboro. 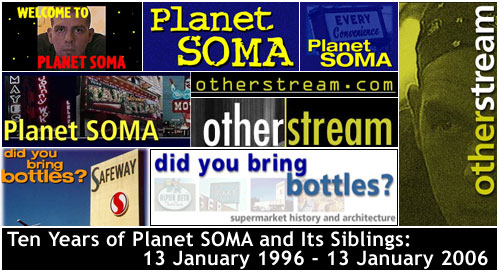 Ten years ago tonight, as I uploaded the very first version of Planet SOMA — using my brand new 28K modem — I don’t think I realized what an effect the damned thing would have on the next ten years of my life…

Kinkos: The Game (via Rae)…

Note to anyone who might care in the Los Angeles area: I’ll be a guest on KCRW’s “Good Food” on Saturday 21 January at 11AM. If you miss the show or don’t live near LA, I believe there’s also a podcast available for free download… 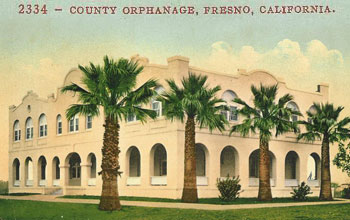 Found this on eBay while looking for something else. I have to wonder about the customer who might have been expected to purchase this back in 1910. Frankly, it just seems a bit tasteless to write “Having a lovely time. Wish you were here!” on the back of a postcard showing an orphanage…