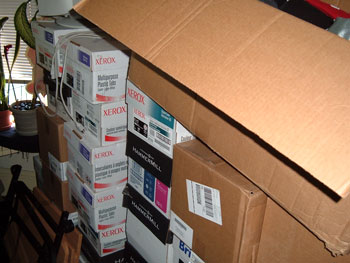 It was a year ago today that we escaped San Francisco. I’ve never once questioned my decision to leave, and I’ve never pondered moving back, not even for a second. I love my boy, I love our new home, and I’m pretty happy with life in general, despite some pretty major bumps in the past few months.

I’d started a longer essay the subject of this one-year anniversary, but it was showing signs of deteriorating into yet another tirade against San Francisco, and I really don’t need to do another one of those. Yes, I was miserable and despised the place my last few years there, and yes, I felt that no matter how hard we worked, our situation was never really going to improve as long as we remained. Ultimately, though, I did have a number of enjoyable years in San Francisco. It’s just that my needs changed over the years, and San Francisco no longer met them. So I left. I’m quite happy where I am now.

In fact, all you really need to do is compare the photo above, from 2005, with the one below, from tonight. Even our boxes are neater and tidier and more organized now that we’ve left San Francisco. 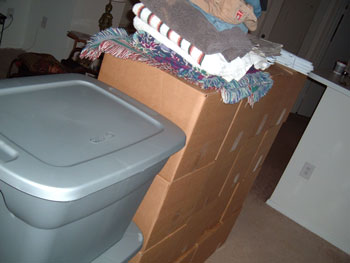 It’s hard to believe a whole year has passed since the escape, though. It seems like we just moved into this place, and now I’m packing everything again. A decade or two down the road, I think this past year will seem vaguely surreal in retrospect, like an extended stay at some strange motel in the twilight zone. When I was driving through Winston-Salem last night after dinner, though, it just felt like I’d finally landed in the right place after many, many years.