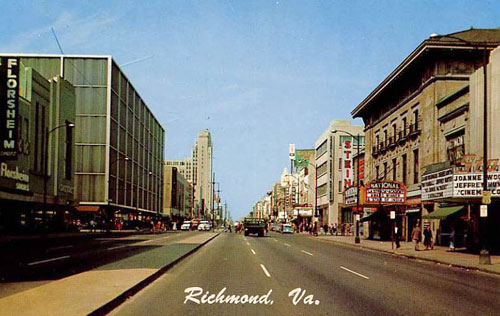 My sanity required a road trip this weekend, and the victim was either to be Knoxville or Richmond. The latter won, since a room at the Red Roof Inn was six bucks cheaper there.

I hadn’t spent any time in Richmond in about twenty years, the last time being a 1987 visit to my, ummm, friend Art when he was attending VCU. You know, of course, about “ummm, friends”, right? They’re friends with whom you’ve been a bit more than, ummm, friendly.

Anyhow, I had a rotten weekend back then (I think it was actually the last time I saw Art) but I loved Richmond. I waited far too long to return.

I left the house about 9:30 and didn’t really make any stops, save for a pilgrimage to South Hill, where my parents and I always used to have dinner on the way back from King’s Dominion or Washington. Alas, the diner where we always ate is now an Asian buffet in a rather bad state of disrepair.

I drove through Petersburg, which I’d only done once before, on a road trip to New York with my friend Jeff in 1988, when we were looking for a motel at 2AM. Petersburg is more pleasant in the daytime. Slightly.

I took US 1 rather than the freeway, which allowed me to see Colonial Heights and Chesterfield County, and to enter Richmond on the wrong side of the tracks (or the river, as it were). Richmond can seem to be a thriving place, but it’s also got some decaying pockets which can seem just plain creepy.

The whole city is full of contradictions like that, which is why I like it. It’s a strange synthesis of hyper-urban north and semi-suburban south, of decaying and depopulating rust belt city and booming sun belt metropolis. It’s got texture that places like Charlotte and Raleigh and even Atlanta will never have, yet its fringes can also exhibit a rather reassuring blandness. Like so much of Virginia, it’s comfortable, but just a little tired and worn-out looking. Richmond is where the south becomes the north. Or vice versa.

I made my way in through downtown, heading outward on US 60, through gentrified Shockoe Slip, gentrifying Shockoe Bottom, and the border vacuum surrounding some large park, to my motel near the airport in Sandston, a town which just screamed “hick”. But they did have a Golden Skillet there, and I had a lunch I hadn’t had since I was a kid. Predictably, it wasn’t as good as I remembered. There was also a very nice former Safeway from the 1950s, Richmond having once been part of the Safeway empire.

After lunch, I began exploring. Most of the afternoon was spent downtown, and in The Fan and Carytown.

I vaguely remembered downtown as being more active and populated last time I visited, but it seemed pretty well bereft of all retail or street life this time around. I did take some pictures of the old Miller & Rhoads department store, which is now being converted into something. Overpriced condos, I imagine. I also shot something that I assume was J.C. Penney.

The Fan is a neighborhood dating from the 1800s, apparently so named because of the way its streets “fan out”. It’s mostly populated by VCU students, yupsters, and other assorted gentrifiers. It’s a pleasant enough place.

Carytown is one of those classic low-rise 1920s streetcar strips, a lively retail and restaurant strip that has fared well over the years, especially as urban living becomes trendy again. It’s the kind of scene you find in all real urban places, but that boosters in wannabe cities (like Charlotte) invariably want to bulldoze or “densify” with bland, bulky condo developments containing chain steakhouses on the ground floor.

Carytown is also home to the Cary Court Park & Shop. Opened in 1938, this is one of the oldest planned shopping centers in the US. It’s been tarted up and made rather upscale now, but it was once a fairly utilitarian retail center with supermarket.

Dinner was at the Piccadilly Cafeteria near Westland Shopping Center, because they have the best roast beef of all the cafeterias. I came back into town via Broad Street. I’m working on an essay on cities that have one dominant main street , like Broad Street in Richmond or High Street in Columbus or Peachtree Street in Atlanta. I’ll link it when it’s done. Suffice to say, though, that I like it.