Never in my wildest dreams did I think I’d find a boy who could get me so damned excited about hanging around the house playing Monopoly on Friday nights. 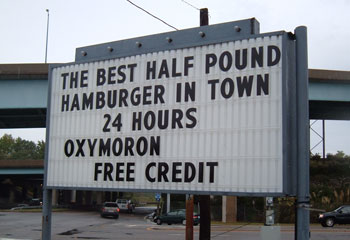 So whither yer humble host?

Despite the fact that I haven’t been all that talkative online lately, depsite all the stress a week or so back, despite the occasional sleepless night, I’m feeling happier and more satisfied with life than I have in years, thanks.

A lot of very positive things have happened to me in the past thirty months, leaving San Francisco and moving back to North Carolina being at the top of the list. Returning to a part of the country that just works better for me at this stage in my life, moving with Mark into out first house, being in close proximity to so many more road trip opportunities, eating barbecue again, and reconnecting with my family have all been great (although the latter has tried my patience from time to time).

Not everything has been so rosy, though. My job quest, and the subsequent realization that I’m not really qualified to do much that anyone wants to pay me for, have been a bit depressing, and have led to some periods of financial tension and general mental anguish. I’ve had a significant chunk of family health issues to contend with, and I’m nervous about what the future holds. The insurance nightmare from last December and January gave me fits. And then there was that whole cancer thing. That kind of sucked, too.

But I’m feeling pretty damned good about everything right now. I’ve lost all of the excess weight I’d put on since moving back east, and then some. I’m getting some exercise, if maybe not quite enough. I’m earning a reasonable amount of money now, if not as much as I should be. And I’m in school, preparing for a profession that fascinates me, and thinking that I finally know what I want to be when I grow up. That’s pretty exciting, and I sometimes get all tingly just thinking about it.

I have goals and plans for the future. I have items in my calendar, and things I need to do, and research I enjoy, and projects that fascinate me, even if they do cause me short-term stress. In short, I feel like I have a reason to get out of bed every morning. To be honest, that wasn’t always the case a year or so back.

Not everything is perfect, of course. I need to find more robust sources of income now, not two years from now. My parents continue to age, and I continue to worry about how I’ll deal with the inevitable problems that will become more and more a part of our lives because of it. I could still stand to lose a pound or fifty. But my outlook is positive, I’m making progress, and as I said above, I’m generally happier than I’ve been in a long time,a dn plan to stay that way.

Actually, I think I’ll be OK even if I do have to face all of those at once. I’d just feel sorry for anyone who had to be round me. And glad that I had a most wonderful and supportive husband. 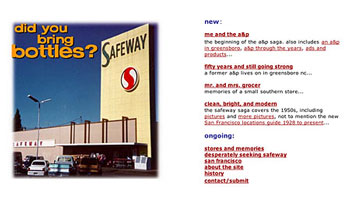 Happy anniversary to me and my Groceteria. My child is eight years old today, more or less. It’s brought me more fame (and fortune, oddly enough) than any of my other sites have. It’s my primary creative outlet and my most popular site ever, by far. It’s gotten me interviewed all over the county, provides me more monthly income now than some of my freelance clients have over the years (thank you, Google AdSense), and even got me my very first paid writing gig. On some level, it actually even got me a husband, since part of the fateful Fresno trip where I met him was devoted to research for the site.

Grocery stores been very, very good to me…

Speaking of anniversaries, my parents are having their fifty-eighth today. Which is pretty damned amazing. And it got lost in the shuffle, but Mark and I had our sixth a couple of weeks ago as well: 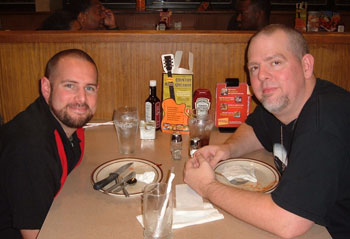 I love that boy. And our anniversary itself didn’t really get lost in the shuffle, only my post about it. And that’s because I haven’t yet had the chance to put up our exciting anniversary road trip pictures yet.

At the rate I’m going, it might not happen before Christmas…

Random thoughts for a Wednesday afternoon:

Random thoughts for a Friday afternoon, since it seems to be all I have the time or attention span for lately:

Earlier this month, two of my sites went down due to negligence (and perhaps even fraud) on the part of Dotmaniac.com, a part of the Interlink Network Group.

Despite having taken my money to renew these domains and confirming to me that they had been renewed, Dotmaniac never processed the registrations, and the domains stopped resolving when the old expiration dates hit. Dotmaniac seems to have disappeared from the face of the earth; they no longer answer phone calls or tech support email requests at all. There’s no voice mail or anything; the phone just keeps ringing. Their website, however, lives on, still accepting registrations and renewals, although its security certificate seems to have expired.

The problem with a dead or otherwise unresponsive registration provider, though, is not the money you spent (which should be recoverable through a credit card dispute) but the fact that you’re sort of screwed in general. Moving your domain to another registrar requires cooperation from the one you’re leaving, so what do you do when the old registrar disappears?

Thanks to incompetence, negligence, orjust plain fraud on the part of Dotmaniac.com, I’ve wasted countless hours, lost a fair amount of ad revenue (and a good chunk of my hard-won search engine placement) at Groceteria, and become a big screaming ball of stress at a time when I didn’t really need it.

I’ve also discovered that you should be realy careful where you register your domains, because there’s almost no oversight over the process, and you could find yourself at the mercy of a shady operator like Dotmaniac.com. These slimy sacks of shit are a part of the Interlink Network Group, located in Vancouver WA. If they ever answered their phones, you could call them up and tell them what you thought of them at 888.888.1051 or 877.744.6638. You could, if so inclined, also send them a fax at 360.571.4538. However, if you actually do business with them, you’re taking a terrible risk.

24 October: Despite being renewed, Groceteria.com “expired”, with its status changed to something called “clientHold”, which — I later found out — means that it has expired and will no longer resolve.

25-26 October: I spent the bigger pasrt of both days trying to contact anyone who could help me. Dotmaniac never answered their phone: no voice mail, no nothing. I also tried contacting Tucows, the back-end registrar (Dotmaniac is a reseller), and got no response from them either. Groceteria had been offline for at least 36 hours when I had to leave town on Thursday, and I was pretty sure Otherstream would be gone by the time I got back on Sunday.

28 October: I was right. By Sunday, there was no Groceteria, no Otherstream, and no email. Needless to say, no one at Tucows or Dotmaniac had gotten back to me either.

29 October: More contact attempts, more frustration. Early this afternoon, a friend of Mark’s suggested a method that might at least get the sites back online, and it seems to have worked. I’m now trying to get all the domains transferred to a different registrar. I also filed a complaints with ICANN, the BBB, and Tucows compliance office.

I’m not entirely sure which technique worked, but here’s what I did to get out of this black hole. At some point after doing all three of these things, my sites came back online and I was able to move my domains to a different registrar:

If you’ve been victimized as well, you have my sympathies. Based on the email I’ve received, I’m not the only one this has happened to. What you see on this page is all the information I have. I can’t give you any more, but feel free to check back for updates. I’m still waiting to see the results of my credit card dispute, and will post them when I have something.

The last one’s an ISP in Vancouver WA, apparently. They don’t ever answer their phones either. If I were you, I’d avoid doing business with any of these sites.

I cannot remember the last time I was as fucking exhausted as I am tonight this morning as I prepare for bed.

Now here’s a business idea I wish I’d had. I may need to consider buying one to match our basement before too long.