When I was about ten, I spent New Year’s Day swimming in the Gulf of Mexico. It was the warmest New Year I ever had. Last night, we went to the other extreme, welcoming in the New Year on a pedestrian bridge a couple of hundred feet above the Allegheny River in donwtown Pittsburgh,  enjoying nineteen degree temperatures and lots of wind.

As any aspiring Pittsburgher must at some point, we had breakfast at Eat’n Park, although we chose the one in Squirrel Hill, where you can’t actually park on the premises. Squirrel Hill is apparently Pittsburgh’s upscale Jewish homosexual neighborhood; the cross-pollination made it less annoying than some other purely gay ghettos like the Castro. As circumcised homosexual Gentiles with middle class incomes, we were not harassed, and we felt quite welcome, even though the houses were probably outside our price range.

We spent a couple of hours driving around south of the river, exploring Homestead some more, as well as certain hilly neighborhoods whose names I don’t recall right now (Old Birmingham, maybe?) before landing downtown for an afternoon pedestrian and photographic excursion.

We finished off our last evening in Pittsburgh back in Squirrel Hill,  with dinner at Gullifty’s and Milk at the Manor. 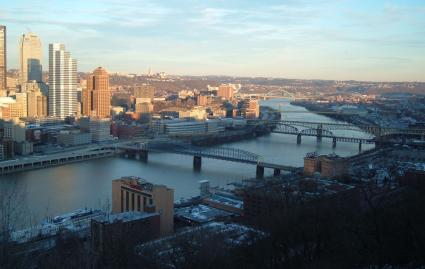 The last Pittsburgh breakfast was at the Dor-Stop in Dormont, which we’d seen a couple of days before. It was a nice enough place, although it was horrifically crowded, perhaps because it was a holiday week or maybe because the place had been featured on the Food Network the week before.

After a final spin through PIttsburgh, we headed south toward Hagerstown (Roy Rogers), Frederick (Safeway), DC (traffic), and Richmond, our home for the night and the site of one of only two Extreme Pizza locations on the east coast. Dinner, a drive through Cary Town, with a stop by Ukrop’s, and downtown completed the last night of the trip.

I hate the last day of a road trip. It’s usually all driving and no fun at all.

Breakfast was at Richmond’s Third Street Diner, which looked enticing from the street and inside, although I could never quite get past the notion that the place was about to be busted either for gambling or prostitution at any moment. I’m sure this was not the case, but there was just this sort of weird paranoia about the place, probably since there were several people drinking at the bar so early in the morning. The mini-skirts and the curious “ticket jars” on the tables didn’t help, nor did the fact that as we finished breakfast I realized I’d left my wedding band back in the motel we’d already checked out of.

Ring recovered, we made a last spin through Richmond (Cary Town, the Fan, downtown, and that hillside neighborhood off East Broad) and even Petersburg, and made our way south on I-85 through such exciting locales as South Hill, Henderson, and finally Durham, where we stopped at Honey’s for our 3PM feeding before returning home to Winston-Salem. 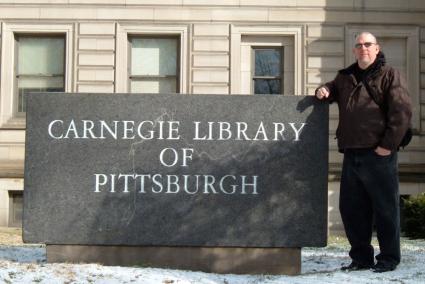 Alive and well, and bearing many new books, photos, and assorted other geeky souvenirs. More to follow.

I seem to have returned home bearing a nasty cold alongside the other souvenirs.

It’s kind of hard to believe that my five-week break from school is sixty percent over before it really even seems to have started. It was a really intense fall semester, and I was sort of looking forward to a few moments of calm. They sort of never came, what with the trip to Fresno in December, followed by the actual holidays, and the big road trip to Pittsburgh last week. I have a lot of things I really want to catch up on before things get crazy again:

I have my doubts that I’ll get it all done.

They apparently changed the Muzak at the cafeteria.

Before, it had been standard, easy to ignore, old-fashioned elevator music (think symphonic covers of “When Doves Cry”) but now, it’s some oldies channel from hell that is apparently programmed to feature all the most depressing songs of the 1960s that you never wanted to hear again, from Donovan to the Byrds, and beyond. In fact, “River Deep, Mountain High” was about the most upbeat thing I heard through my whole dinner, which is kind of sad. Literally.

After enduring twenty or thirty minutes of this, I think I finally know why so many people did so many drugs during the 1960s.

Midnight Oil
The Power and the Passion, 1983.