It had been five years since my last trip to the Pacific Northwest, the land where I’d move in an instant if no external considerations were present. Last time I’d driven up on my own, stayed with friends in Portland, and met a friend from Minneapolis for the drive to Seattle and back home. Everything was great until I met up with said pouty friend and was frustrated by not getting to spend any significant time in Seattle.

This time around I was riding with Mark, who promised to be a much more entertaining travelling companion. I was looking forward to one of the best road trips ever, and I pretty much got it. 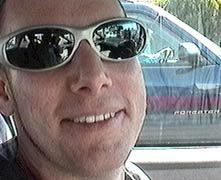 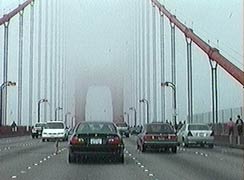 Mark showed up at my house about noon, having already driven three hours from Fresno. We packed up and got in the car, and after spending more than half an hour in traffic trying to leave this hellhole of a city, we were on the Golden Gate Bridge, headed for Eureka. 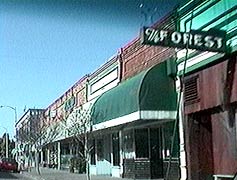 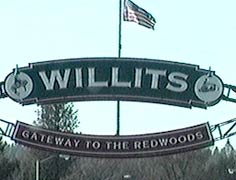 We took the scenic route, up US 101 through Santa Rosa, Ukiah, Willits, and any number of other small towns, most of which had numerous roadside stands specializing in carved bears and miscellaneous yard ornaments. There were motels and diners and all the things which make US highways more interesting than interstates. 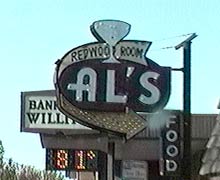 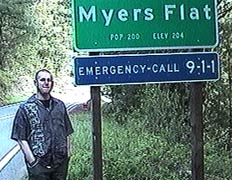 We stopped in Ukiah for provisions and ice cream. It was really hot. Our ice cream melted. And at Myers Flat, we hit our first big milestone: Mark was, at that time, farther from home than he’d ever been. We took pictures to commemorate the event.

We also pissed in the woods, but that was more of a “back to nature” sort of thing…

We arrived in Eureka about 7:00 and checked into our reserved room at the Motel 6. Well, not exactly, as they’d lost my reservation. But we got a room anyway, and used it to stretch our muscles a bit. We felt much better afterward. 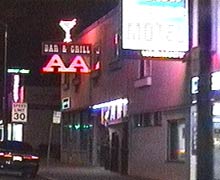 Eureka is a pleasant enough place, and the cool weather was a significant improvement over the heat in Ukiah. But it’s not quite as interesting as I’d somehow thought it might be. We toured the city by night, ate at a Mexican restuarant which was passable, if not authentic, and came home to bed, where I had a little trouble sleeping due to a bit of stiffness in the leg. We decided to make more stops to walk around on Sunday’s drive.