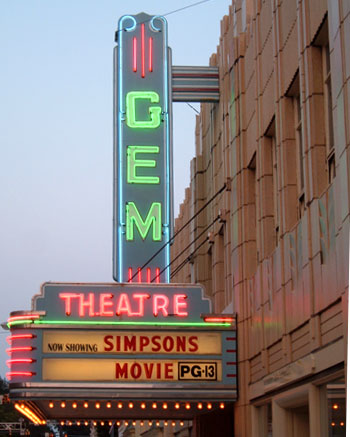 We’re drving the sixty or so miles down to Kannapolis tonight to see The Simpsons Movie someplace a little more interesting than the neighborhood googolplex over by Wal-Mart.

Only seven shopping days left till my 43rd birthday, which will be memorable only for the fact that it means I’ve made exactly half the trek from 21 to 65. Which is, I suppose, considerably better than not making it. 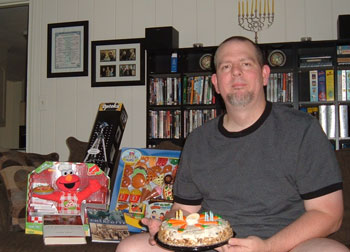 I had my birthday six days early on Saturday night, since Mark will be in The City of Doom on Friday. I got a tripod, and some really good books, a Wait Till Your Father Gets Home DVD (or four), a cool set of fake plastic food, and a Pizza Elmo, which is one of my favorite Elmos so far. 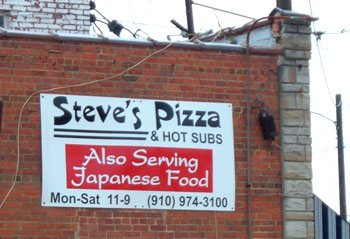 Sunday being the hottest day of the year so far, we had also managed to plan a road trip to the hottest part of the state: the greater Rockingham-Hamlet-Laurinburg metropolitan area. That whole chunk of the state from Fayetteville south is so incredibly bleak and depressing. Rockingham and Hamlet remind me of Pixley and Los Banos in California, the former being a place where all hope seems to have vanished and the latter apparently exisiting only as a highway stopover and home to the area’s obligatory Wal-Mart Supercenter. 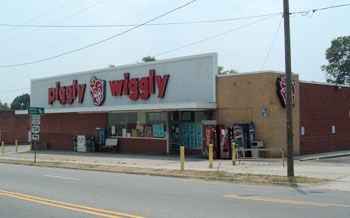 At least there’s a Piggly Wiggly in Hamlet, but it’s closed on Sunday. We had to visit the Food King instead. It’s a cool store, and it used to be a Piggly Wiggly (and before that, an A&P) but I was a little disturbed to note the mold growing on one of the cakes they had displayed. I was even more disturbed that the cashier didn’t really seem to care when I mentioned it to her.

We circled back through Charlotte, which is not really on the way unless you drive the way we do, and visited some friends and passed out tomatoes. We have lots of tomoatoes.

All in all, it was a good weekend.

Endangered Durham is the kind of website I live for: the author is trying to document pretty much every piece of property in downtown Durham, over time and with vintage and current photos. This is the sort of obsessive mission the web is supposed to be all about, dang it. 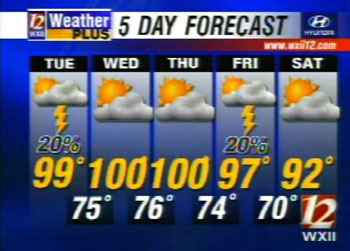 Notice how their layout doesn’t even allow for the possibility of three-digit temperatures? That’s because weather this hot is just wrong.

My 76-year-old mother has recently discovered ABBA, nearly thirty years after most of the world did, and she’s become a little obsessed with them. I find this absolutely adorable, and I apologize if that sounds condescending. It’s not meant that way.

It’s a testament to the power of iTunes, I guess. I put one or two ABBA songs on her new Mac Mini several months ago. I have my suspicions that she initially latched onto the Swedish superstars because she didn’t know how to sort any way other than alphabetically (the default), nor had she quite clued into the whole “party shuffle” thing. Thus, they’ve always been at the top of the page whenever she opened the program, sort of like AAAAA-1 Plumbing in the Yellow Pages.

She usually shops in the $1.99 CD bin, and winds up with things like the Flamenco guitar version of the entire Burt Bacharach catalogue.

Today at lunch, a Blondie song came on. She asked if it was ABBA. I told her it wasn’t, and then wondered for a moment how a Blondie compilation might change her life. Blondie starts with a “b”, so it would be pretty easy for her to find in iTunes, right?

Either way, I think it’s just about time for her to see The Adventures of Priscilla Queen of the Desert. Or maybe just Mamma Mia.

Am I supposed to be surprised and impressed that the proceeds from a package of cheese will go to dairy farmers? Maybe I’m hopelessly naive, but where the hell else should I expect them to go? It’s not like dairy farmers are some impoverished charitable organiztion holding a benefit concert; they’re businesspeople who produce and sell dairy products for profit. Which, contrary to popular belief, is not inherently evil.

The idea that every single commercial transaction must include some random bit of philanthropy (on both sides) is wearing a bit thin, especially now that it’s such a cliché that it’s now being used to the advantage of the very “evil” corporations it’s presumably designed to be a reaction against.

Ever have one of those nights where you just crumple yourself into a little ball and keep asking yourself over and over again why you continue watching local TV news? Of course, I do it because of Lanie, but sometimes, like after a 90 minute newscast that covers exactly one story, I wonder if even she makes it worthwhile anymore.

Speaking of TV, I’ve decided after four episodes that I actually do like AMC’s Mad Men. I already liked it in theory, but I hadn’t decided for sure if I liked it in practice. I still don’t think it’s great art or anything, but it amuses me. It also occasionally makes me want a martini, which is not something I’ve ever particualrly wanted before (and is something I’ll probably skip). 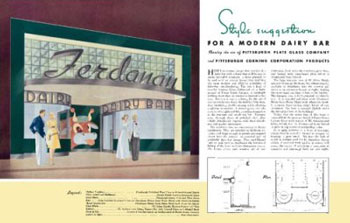 This book (thanks Jamie) is so amazingly cool, both as art and as architectural history. It’s primarily composed of catalogue pages from glass companies promoting ultramodern “visible storefronts” in the modernist tradition, including sketches, floor plans, and construction materials. It’s incredibly beautiful. 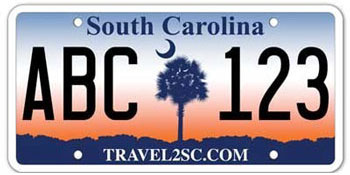 If I were the state of South Carolina, and I couldn’t come up with a less stupid, cheesy, and spam-like domain name than “travel2sc.com”, I think I’d skip putting it on my license plates. But, as many have noted, South Carolina seems to exist primarily to give North Carolina someplace we can feel superior to.

Thirty years ago today, a tacky, bloated drug addict of questionable talent died, and for the life of me, I’ve never quite understood why so many people care.

And it’s a happy birthday to my dad, who is (in case you were wondering) recovering quite nicely from his surgery last month. He’s already ditched the walker and he’s even started driving again.

In case you care, you can read an interview with me on Yahoo! Picks Profiles today. It’s a followup to when this site was a Pick of the Week back in 2001. 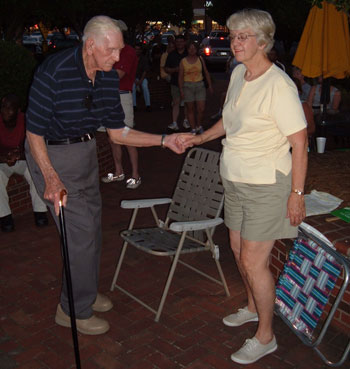 Check out my dad, having an 82nd birthday dance with my mom, less than two months after his hip replacement surgery.

Before meeting up with my parents, I stopped by campus to buy my textbooks. I’m not sure what shocked me more: the price of the books or the fact that everyone on the entire campus looks about thirteen years old.

It’s very odd making my third return to UNCG. Everything is so different, but small, random things are exactly the same as they were during my first two enrollments, like the tables in the student union where they sell the very same Doors and Bob Dylan posters “art prints” they’ve been selling at the beginning of each semester since about 1968, as far as I can tell.

Am I nervous about entering a classroom for the first time in sixteen years? You betcha I am. 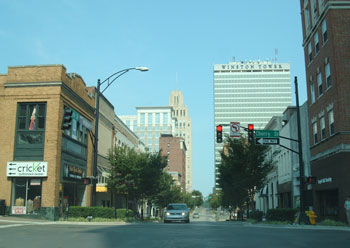 Reflections on my first week back in school (among other things) are yet to come, but it’s been sort of an all-around crazy week, and the weekend isn’t looking much calmer, so it may be a while.

But just so you’ll know I’m still alive, here’s a random shot of downtown Winston-Salem that has nothing much to do with anything I’ve said here. 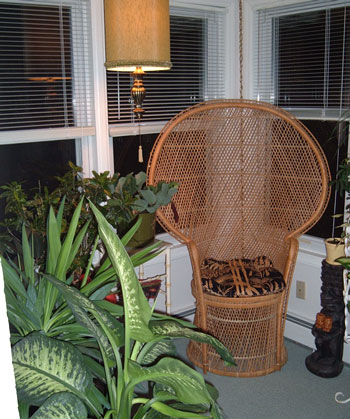 We’ve moved way ahead in our ongoing dream of transforming the Tiki Room into Morticia Addams’ conservatory. All that’s missing is Cleopatra, the venus flytrap. 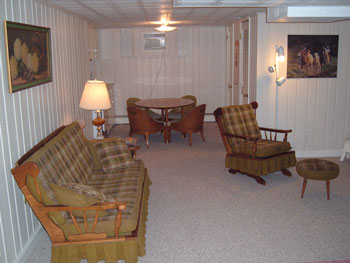 Yes, this will no doubt be remembered as the week we got serious about finally filling up our house. And the thrift stores were as cooperative as I’ve ever known them to be. We’ve fleshed out lots of the empty spaces, particularly in the basement rumpus room, with a sort of 1967 blend of neo-traditional modernism centered around the mint-condition sofa and matching chair, and a low-slung “party table” (it actually says that on the bottom) with barrel chairs. And there are finally curtains in the bedroom. 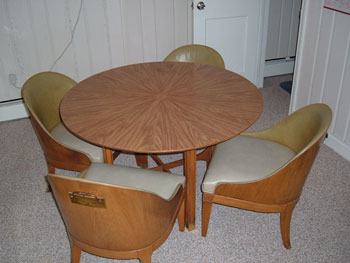 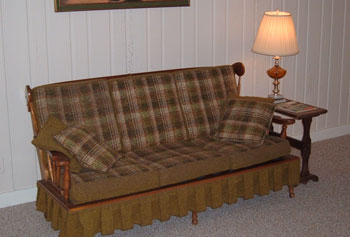 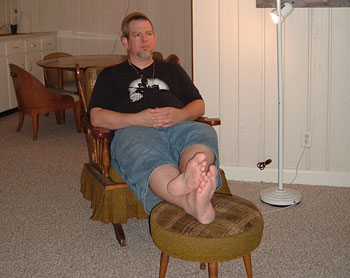 Random snapshots from my first week as a graduate student:

Ten years ago this week, I was getting ready to leave on the Planet SOMA US Tour of 1997. It was a pretty major event for me: a five-week cross-country (and back) road trip where I’d be staying in assorted motels, and sometimes with complete strangers who invited me into their homes on the basis of having enjoyed my website. I updated almost daily from the road (which was rather unusual in those early internet days) and had a really great time all the way around.

For the next five weeks, I’ll be saluting and remembering that trip, and you can follow along day by day if you like, using the nifty “Otherstream Retro” box you’ll see at the top of the front page. Or you can cheat and read the whole story. Or neither one. Your choice. Either way, enjoy it. I did.